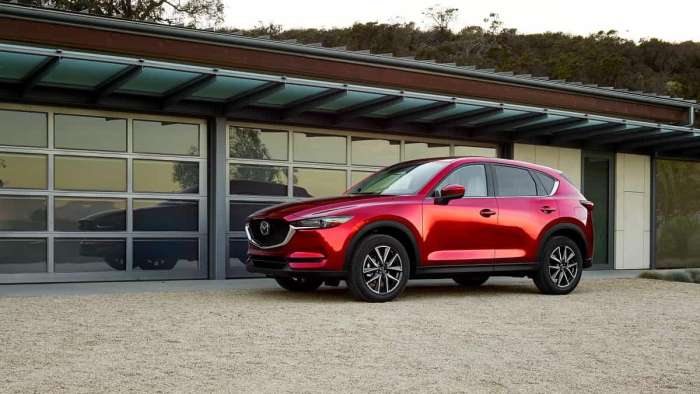 The 2021 Mazda CX-5 and Subaru Forester crossovers both passed the 20K units per month mark in May. Here is a look at how successful the CX-5 model has become for Mazda.
Advertisement

In May, Mazda reported sales of 20,595 units of its highly successful CX-5 crossover. This marks the first time we remember it breaking that milestone, and it is a record for the model in America for Mazda.

May was a record-setting month for many automakers in America. Although scarcity looms large, the factories that could operate at capacity found enthusiastic buyers for the vehicles that came out of them. Traditionally, the Toyota RAV4, Nissan Rogue, and Honda CR-V are 1-2-3 in sales in America for the most popular non-truck segment. Just behind that trio are the Chevy Equinox, Subaru Forester, and Mazda CX-5.

Subaru also had a record-breaking month with Forester sales of 20,006 units in May. These two popular crossover SUVs are separated by less than 600 unit sales in a month. For the year, the Forester still leads the CX-5 with over 87K units sold, vs. the 76K units Mazda has sold. However, Mazda may catch Subaru by year-end. Much will depend on the Japanese factory capacities both employ to build these two US models.

One reason that Subaru's Forester sales are not larger is that the company makes another crossover SUV almost identical in capacities. The Outback is a smidge smaller inside and a bit longer, but fills the same needs for Subaru shoppers on the showroom floor.

The success of both models speaks to how powerful this segment has become. The two-row crossover has become America's family "car," favorite commuter "car" and fills more roles than any other vehicle. Were it not for commercial sales of pickups, this would be America's largest vehicle segment.