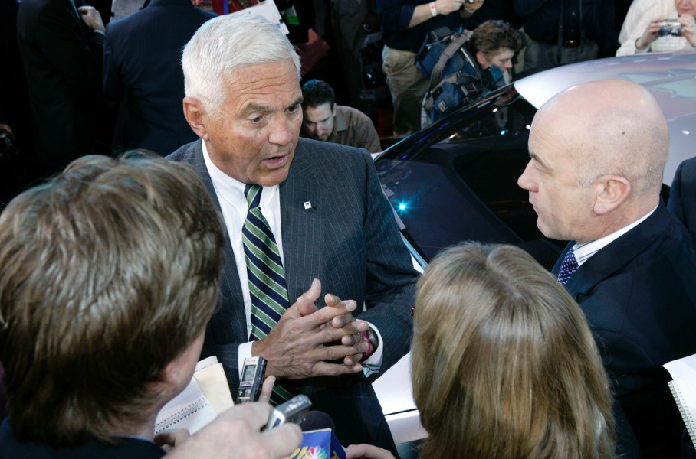 General Motors' former Vice Chairman Bob Lutz has gone on the record predicting private cars will be outlawed on public roads. Listen to his points before you discount this prediction.
Advertisement

Former General Motors Vice Chairman Bob Lutz is an outspoken, opinionated former executive who is often spot on in his predictions. Near the end of his career, he was instrumental in creating the range-extended plug-in electric vehicle. This earned him the wrath of EV advocates, who don't really want to save the environment so much as they want to eliminate gasoline options altogether. They like him even less now that he has predicted Tesla is doomed.

You might think from his predictions that he is out of touch or doesn't think that EVs and autonomous vehicles will be the future. If you jumped to that conclusion, you are dead wrong. Lutz not only sees autonomous vehicles as the future, and electric vehicles as well, since all autonomous vehicles will be electric, but he predicts that personal vehicles will be legislated out of existence. Lutz says there will still be vehicles, just not driven by people. In a new five-part story published in Automotive News, Lutz says, "...vehicles, however, will no longer be driven by humans because in 15 to 20 years — at the latest — human-driven vehicles will be legislated off the highways." And what will become of the cars we citizens already own? Lutz says, "Of course, there will be a transition period. Everyone will have five years to get their car off the road or sell it for scrap or trade it on a module."

Read the story, as we did, to get his full message and see how he thinks the transition to fully-automated vehicles will reach a tipping point at the 20% market share level. We read his vision for the future and among the senior writers at Torque News couldn't find much to argue against. Our own Parks McCants voiced one thought we had, saying, "What's omitted from Bob's vision for the automated future of human transportation is the rural side of the equation. While highly automated transportation module pod-trains are most likely the future for our major cities and interstate highways, 4 million miles of dirt and paved roads in America are rural. I believe the full market transition to full automation is decades off." In fairness to Lutz' argument, so does he. He sees the transition happening in one or two decades after automation begins in earnest.

The point McCants makes about rural driving is important. Except to the majority of Americans who don't live in a rural area. City-born and bred politicians do now, and will in the future, mandate ridiculous rules like bike paths on highways (one was recently installed on interstate 1 in Plainville Mass near this writer's home. Where the speed limit is 55 MPH). Many, if not most professional policymakers in Washington, New York, and other major metropolitan areas see rural areas as places to visit for quaint outings. Personally, I hope McCants is right and some kind of coexistence can be worked out between autonomous city commuter cars and suburban and rural semi-autonomous cars. However, if the U.S. is showing any recent trend towards accommodation it is hard to pinpoint.

The article by Lutz hits close to home for Torque News. Lutz points out, "I think Automotive News is doomed. Car and Driver is done; Road & Track is done." The personal opinion of this author is Lutz is right. Specialty magazines like Car and Driver that measure the skidpad adhesion of minivans and that select the best three-row crossovers based on 0-60 MPH sprints are simply ridiculous and their expiration date is well past due. McCants sees it more subtly. He argues, "While there's still a pulse, the aging corpse that is automotive journalism is being kicked in the head by YouTube, Google, and the auto brand P.R. departments that we communicate with. I'll leave it at that. It takes an effort on behalf of the consumer to read an article. YouTube offers instant gratification, is smartphone friendly and infinitely re-playable. The top 10 auto-related websites are sales tools for car brand names, online virtual used car mega lots, or consumer advocacy groups. Yes, there remains a fringe group of die-hard gearheads willing and able to read a well written, photo-heavy essay. But that group is dwindling, as the vast majority turns to video, and often reactionary auto brand forum sites."

If you've stumbled upon this story between Youtube videos and have somehow read past the 240 word average for today's reader interest, we hope you will give the Automotive News story we reference above a click. Bob Lutz has been right a lot more than he has been wrong in his lifetime and what he is saying will go way beyond just the automotive aspects of our coming few decades.

Thanks Parks McCants for taking time to weigh in.