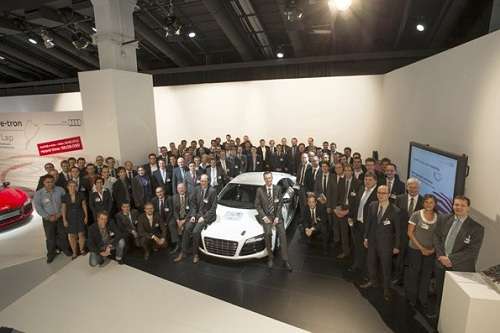 Audi's collaboration with other German automotive giants has now concluded and the result is some very interesting technology we will soon see in our cars.
Advertisement

After a three year collaboration, Audi has concluded its e Performance study. Done in conjunction with automotive giant Bosch and other institutes at the RWTH Aachen University, the study has produced some excellent results in the eyes of electric vehicle enthusiasts. Dr. Christian Allmann commented on the team approach to this study “From the very beginning, our initiative was the largest interdisciplinary research project in Germany for electric cars.” Funding from the project came from a variety of sources including the German government, which kicked in about two thirds of the 36 million Euros used to fund this study.

The objective of the study was a common, flexible platform that could be used to underpin a variety of vehicle types such as a premium electric sedan and an electric sporty car, as well as a plug-in hybrid (PIH) vehicle platform for the same types of vehicles. Of course the hype and examples center around the sporty car. Audi is a competitive company and their record lap time at the Nürburgring is s source of great pride at the company. Having driven the Audi A3 e-Tron car on a couple of occasions, it is clear that Audi’s intent is not a stripped down ultra-economy car that is terrible to drive (as can now be purchased from a couple of manufacturers). Audi is trying to create an electric or PIH vehicle that can be an enjoyable vehicle.

Rather than just one breakthrough Audi and the team on the project have made three. The first centers around safety. By carefully designing the two separate battery blocks used to store energy for the platform, Audi was able to create a network of 200 beveled cells that overlap and compress if struck in an accident. This reduces the chances of some kind of battery related fire or short. In addition, Audi constructed a cast aluminum housing designed to withstand even the impact of a “wrap-around” style side-impact pole strike. Designing safety into the electric platform is good engineering and good politics since each and every fire or similar event that is reported to happen in any electric vehicle produces news coverage that rivals the Kennedy assassination reports.

Audi next focused on the electric drivetrain. Instead of a single, one speed electric motor, which is the current offerings in almost all electric vehicles, Audi’s platform has three, and each can be controlled separately. At slow speeds the front axle’s motor is used. During spirited driving there are two more, asynchronous motors at the rear that make the vehicle not only a Quattro drive, but also quite a performer. Total system output is over 200 horsepower. Whether the cost constraints of a production vehicle will allow this type of three motor system is in question.

Audis’ final breakthrough was in the electrical system. It can operate at 200 volts under normal loads and then switch over to 400 volts in high demand situations. In addition to these major breakthroughs Audi also employed a high efficiency heat pump to help heat the vehicle and for thermal management of the battery areas.

Studies like these sometimes are over-hyped by the press. However, in Audi’s case, since the company has a whole fleet of actual electric vehicles in operation these findings are very likely to be put to good use soon in a vehicle one might find a local dealership.