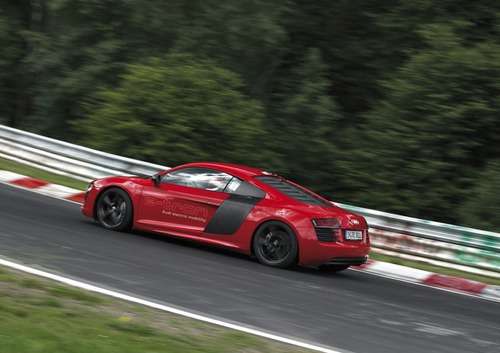 The Nürburgring is one of the toughest race courses in the world, and Audi is the latest automaker to set an electric car speed record there, with an 8:09.099 minutes lap time.
Advertisement

The drive system on the car is the same as the production R8 e-tron which Audi says will come on the market at the end of this year. It has two electric motors, each generating an output of 280 kW and 820 Nm of torque. This gives the R8 e-tron a 0-62.14 mph (100kph) time of just 4.6 seconds. Top speed is normally limited to 200 kph (124.27 mph), and a 250 km/h (155.34 mph) limit was approved for the record-setting lap. It carries a lithium-ion battery pack with 49 kilowatt-hours of capacity, which Audi claims will give a 215 kilometers (133.59 miles) driving range, but the company does not specify the test protocol behind that range claim. The battery pack is in a T shape, allowing it to fit into the central tunnel, and behind the passenger compartment. The car body is primarily made of aluminum along with carbon-fiber-reinforced-plastics (CFRP) giving it a weight of just 1,780 kilograms (3,924.23 lb), despite the large battery pack.

Following the lap record of 8:09.099 minutes, driver Markus Winkelhock took out a second R8 e-tron onto the Nordschleife, this one was limited to a 200 km/hr speed, and took two hot laps. The 8:30.873 and 8:26.096 minutes lap times were meant to "underscore the production-relevance of the R8 e-tron and the capability of its drive technology."

“The R8 e-tron has given a magnificent demonstration of its potential on the toughest race track in the world,” said Michael Dick, AUDI AG Board Member for Technical Development. Dick, who completed a fast lap himself in the R8 e-tron, added: “The record-setting drive confirmed that we are on the right track. To us, electric mobility has never been about sacrifice, but rather is about emotion, sportiness and driving pleasure.”

The 8:09.099 minutes lap record is impressive considering the Nürburgring lap record for gasoline powered powered cars stands at 7:11.57 minutes, achieved with a Gumpert Apollo Sport, which is powered by a 515 kW (700 hp) Audi V8 gasoline engine. However, Toyota currently holds the lap record for electric cars set when the Toyota Motorsports Group EV P001 ran a 7 mins 47.794 secs lap at the Nürburgring. What's different in Audi's case, is that the Toyota record was set with a race car, whereas the Audi R8 e-tron is an electric version of the Audi R8, which in turn is a production sports car. Audi's literature uses the phrase "series production car" which the FIA defines as a car with over 5,000 units per year production volume. While the R8 e-tron has yet to go into production, the R8 is in production.

“Of course, the R8 e-tron is a production car, not a racing car with the assistance of aerodynamics,” Winkelhock emphasized. “But with its low center of gravity and rear biased weight distribution, it brings with it a lot of sporty qualities. The torque with which the electric motors propel the car uphill beats everything that I know – even if they make hardly any noise in the process, which at the start was really a completely new experience for me. In places where I really need traction, the torque vectoring – the displacement of the torque between the powered wheels – really helps me.”

Let's put a little bit of perspective on the R8 e-tron versus other electric cars. First, the 49 kilowatt-hour battery pack is enormous compared to electric cars like the Nissan Leaf and Ford Focus Electric, each of which carry 24 kilowatt-hours of storage. Second, the 0-60 time of 4.6 seconds is impressive, but the Performance version of the Tesla Model S (which just went into production) has a 0-60 time of 4.4 seconds, for a full size sedan.

In addition to these achievements, a team driving an Audi R8 e-tron Quattro won the 24 Hours of Le Mans race in mid-June, making it the first hybrid car to win that race.