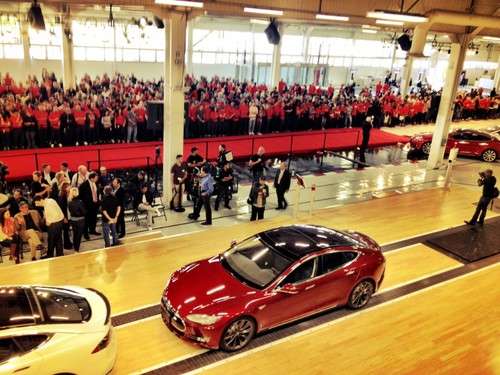 At a ceremony attended by Gov. Jerry Brown and other dignitaries, Tesla Motors made first customer deliveries of the Model S electric car, calling it the best car, period.
Advertisement

Before a packed crowd that included Gov. Jerry Brown, NHTSA Administrator Strickland, and other dignitaries, Tesla Motors made the first deliveries, to paying customers, of the company's luxury electric car, the Tesla Model S. The moment marked the end of over four years of development for the Model S, and marked the beginning of what may become the first successful new start-up automobile manufacturing company in America in over 50 years.

Gov. Jerry Brown opened the event congratulating Tesla for having achieved a great milestone. He was followed by JB Straubel, CTO of Tesla Motors, who reflected on the 9 year journey saying "This whole thing started about 9 years ago, with a simple idea, to build the next Great American Car Company, to build the best cars in the world, not just the best electric cars, but the best cars, and to do all that with technology that did not burn any petroleum, to help get us off oil completely." He went on to talk say the company had exceeded all its goals, and was knocking it out of the park in terms of delivering excellent cars, and that the real accomplishment was more than the cars themselves, it was the team which had been built in order to design, manufacture and test these vehicles. He said "The success of Tesla hinges on the awesome group we've assembled," and that the company has brought together some of the most talented, most motivated people in the world, with a targeted mission, to "make transportation sustainable, and to make the best cars in the world." Another milestone reached by the company was to grow to over 2000 employees.

Next up was Franz von Holzhausen, the lead Designer at Tesla Motors, who talked about the laundry list of features given to him by Elon Musk that "didn't equal a Sedan." These features included seating seven passengers, best aerodynamic efficiency, lowest center of gravity, best 0-60 time of any sedan on the market, best functionality, best looking car in the world, and "on and on and on". Four years later they are delivering what Holzhausen described as a dream, and not only did they achieve every item on the laundry list, but they achieved more, if only because of the extremely high safety rating achieved by the Model S. It is a very aerodynamic car, it does seat seven people, and it has more functionality than some crossover vehicles. In an inspiring closing he said, "Imagine, if this is where we're starting, imagine where we're going."

Next up was Elon Musk, Chairman and CEO of Tesla Motors who, asking what is the Model S really about, said "The Model S is about breaking a spell, that the world has been under this illusion that electric cars cannot be as good as gasoline cars, that if you have to go with an electric car, you're accepting a product that's worse. What the Model S is fundamentally about is breaking that illusion, it's showing that an electric car can in fact be the best car in the world."

These were big words, spoken by people proud of their accomplishments, who know every nook and cranny of the car they have created. What's next is the delivery of cars, the Model S, to paying customers, and the real world experiences they will have, that will determine whether Tesla Motors has indeed knocked it out of the park. But what is this car that inspired these men to say such things?

It is the first production luxury electric car in the world. It seats seven people, due to an optional third row of seats in the back, an unheard-of feature for sedans. It can come with an all-glass panoramic roof that has to be seen to be believed. The center console is a 17" LCD display, with a touch screen computer to control the infotainment system, control settings of the car systems, and even give Internet access. In addition to a full rear trunk, the Model S has a full front trunk because the car does not have an engine that would normally sit in the front compartment. The features go on and on to validate the designers claim that this is the "best car in the world."

As an electric car, the Model S has the longest driving range of any production electric car, at 265 miles. With an 88 MPGe efficiency rating it is not the most efficient electric car in the world, but in the realm of automobile fuel efficiency it is near the top. The performance of the car is what one would expect from Tesla, with a 0-60 time of 5.6 seconds (or 4.4 seconds for the performance model), 1/4 mile time of 13.7 seconds (or 12.6 seconds on the performance model) and a top speed of 125 miles/hr. The charging system includes a high powered charger capable of a 90 kilowatt charging rate, that can fully recharge the car in an hour, making the Model S the first electric car where traditional American style road trips are possible.

The location of the event was also significant, it being the former NUMMI plant that was jointly operated by Toyota and GM. GM's bankruptcy meant that GM had to pull out of the factory, leaving Toyota holding the bag and eventually shutting the plant down. A couple months later came news that not only had Toyota made an investment in Tesla, but that Tesla was to buy the NUMMI plant from Toyota for a pittance of $42 million. Tesla's factory had produced nearly 500,000 cars at its peak volume, which gives the company plenty of room to grow and expand production as it develops new car models in the coming years.

We had hoped today would include discussion of the Supercharger network, given Elon Musks remarks at the recent Tesla Shareholders Meeting. The Supercharger is the 90 kilowatt charging system capable of completely recharging a Tesla Model S within an hour. In that meeting he talked about how "there will be some interesting stuff with solar and superchargers, but I don't want to jump the gun on that, that's going to be exciting to see." And that, "We have to solve sustainable power generation as well, and solar is the best way to do that. If we have sustainable power generation, and sustainable power consumption, then we really have solved the problem." These are big ideas from a man who is not only the Chairman of Tesla Motors, but also of Solar City, one of the largest solar installers in the country.

Indeed, if this is where Tesla is starting, where is it going?

Tsingshan's Threat to Tesla: EV Maker Is In Battery Crosshairs
Tesla-Funded Research Reveals One of The Biggest Mysteries of EV Battery
END_OF_DOCUMENT_TOKEN_TO_BE_REPLACED