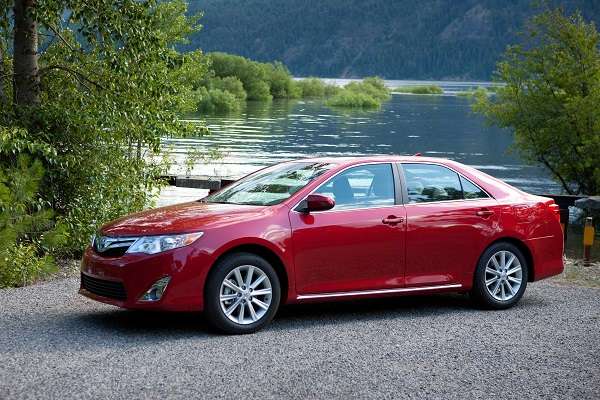 Kelly Blue Book ranks the Toyota Camry the number deal in its class for August.
Advertisement

The 2014 Toyoa Camry is selling at a tremendous pace. Yet, Toyota is still pricing the car to sell. Edmunds has just released its list of the Top 10 Best New-Car Deals For August, and the Camry ranks number five on the list and number one in its class. What is it about the Camry that makes it such a value?

KBB Ranks Camry First In Class
Kelly Blue Book (KBB) is the organization most dealers and many customers turn to for new car fair price estimates as well as used car valuations. Jack R. Nerad, executive editorial director and executive market analyst for Kelley Blue Book's KBB.com says that, "Compact and midsize sedans are among the most popular segments in the United States. This month consumers will be able to find red-hot deals on the Toyota Camry, Ford Fusion and Chevrolet Cruze," He went on to say that, "As a new-model year nears, car shoppers will also discover great values in luxury cars, SUVs and pickups." The Camry is currently in its last year of the body style it has had for some time. It will be all-new for 2015, and Toyota seems intent on making the last of the 2014.5 models move fast.

Camry Top Safety Pick+ and Consumer Reports Recommended
The 2014.5 Camry is an IIHS Top Safety Pick Plus, the highest safety ranking possible. The Toyota brand and Camry in particular have also won numerous awards for quality, durability, and reliability.

KBB Price Estimates for Camry
Although it is just an estimate and not a firm offer from every dealer, KBB says that the Camry’s Kelly Blue Book Fair Purchase Price is just $ 21,698. Toyota is offering customers $1000 cash back on their best deal. It should be noted that this is a deal on a near-base model Camry.

By Comparison, the Ford Fusion is number 6 on the KPP list. It has a KBB Fair Purchase Price estimate about $1500 higher than the Camry, but Ford is offering $1500 cash back to buyers.

Related Stories:
2014 Toyota Camry ahead in sales but design switch may put 2015 Ford Fusion on top
2015 Camry gets an extreme makeover

KimShugart wrote on August 14, 2014 - 11:15am Permalink
MPG performance in the Camry line is as strong as ever, the 4-cyl is 35mpg highway; V6 31mpg; Hybrid LE is 43 MPG which is in the same ballpark as the Prius with 48mpg highway and 51 in the city. The SE has a 268hp 3.5L V6 as an option while the Hybrid's 4cyl Atkinson-cycle 156hp engine with the electric motor of Toyota's Hybrid Synergy Drive elevates total net horsepower to 200hp, which makes it the most powerful hybrid in this class. ~ Kim Shugart, CEO