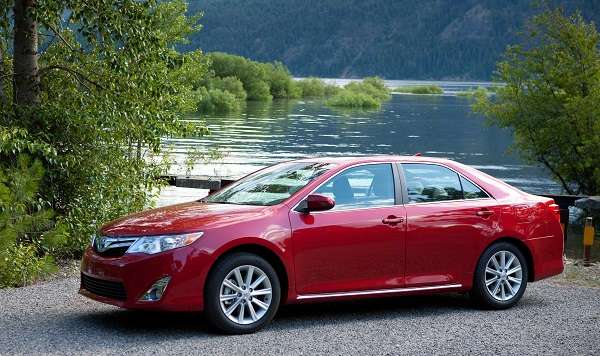 2014 Toyota Camry number one in US sales, even with 2015 model just months away

The new 2015 Camry is right around the corner, yet the 2014 model is still outselling all its peers. Here's why so many more people buy the Camry.
Advertisement

The 2014 Toyota Camry is an interesting car. The current Camry's sales are actually accelerating. Although it is now at the very end of its design cycle, and even though a brand new look with major mechanical changes is just a handful of months away, the car is still the number one car in America. And number two isn’t even close. What is it that allows this older design, which so many automotive publications like to call “boring,” beat the competition so handily?

In May Toyota sold 49,584 of its 2014.5 model year Camry’s in the American market, up 26% over last year on a volume basis. The “.5” half-model year indicates a recent change that included reinforcements to allow the Camry to earn its Top Safety Pick+ rating, the highest safety rating possible in the US market, as well as its “Recommended” designation from Consumer Reports.

By comparison, the Honda Accord, Camry’s long-time peer at the top of the car world, sold “just” 39,637 units in May. We put “just” in quotes because that is also an incredible number of vehicles. There are car companies in America that sell at that level. The Nissan Altima logged in 36,000 units sold. Ford is justifiably proud that its Fusion just leapt up 42% in sales to 33,881 vehicles. The Hyundai Sonata’s sales are flat at about 20,400 units per month.

Before the new Camry was revealed many in the press recently speculated that Toyota was changing its look to be more like the Sonata. Although that could have been the case, the reverse is true. The Sonata just became a lot more conservative and the Camry’s new 2015 look is pretty much a melding of the Corolla and Avalon. Both designs predated the Sonata’s update.

Why The Camry Is So Popular
In the opinion of this writer the Camry is the leading seller, not primarily because of the car’s current deign details, although it can hold its own in any objective comparison. The Camry may not be the fastest, most stylish, or most fuel efficient car in the field, no single car is. Each of the sales leaders have their own little category wins. Rather, the Camry is so popular because of Toyota’s core principles of reliability, durability, and value. Over the past three generation – not of cars, but of people – the Camry has always been a solid family car. Word of mouth, personal experience, and good Toyota marketing has made this known. That momentum is hard to displace, even with an excellent car like the Accord, Fusion, or Sonata.

The Camry Isn't Boring, Commuting Is
Some peg Toyota and Lexus cars as boring, as if the companies don’t offer excitement within their lineups. This comes from the fact that the most popular trims selected by customers tend to be the lower priced, highest value ones. It is easy to forget that the Camry can come with a powerful V6. Beating BMWs costing 50% more in a stoplight race is not boring. Try it sometime. Toyota offers some trims that can be exciting compared to cars in their class, however most customers just want to get to work without any drama, and they pick a car that delivers that. Jaded auto writers stepping out of a $90,000 BMW M5 and into a $23,000 Camry sometimes find it hard to believe people actually buy fuel efficient 4 cylinder family cars tuned to deal with giant potholes rather than racetrack apexes.

2015 Camry Sales Headed Up
The new 2015 Camry coming next year is not a completely new design, but it does change a lot. The look is going to be more popular. Toyota knows this from focus groups, but also from the sales increases that the Corolla and Avalon saw after the same styling elements were applied to those cars. The newish Camry coming later this fall also will have a new longer wheelbase and will be a bit longer. The interior will be completely refreshed, but we will have to wait a little longer for the coming 2.0 liter turbocharged engine. Toyota is also offering new trims that combine the sporty look and luxury treatments. Smart.

Camry Will Remain the Top Seller This Year
The Accord has the design and marketing power to overtake the Camry over the next couple years. Ford too could come on strong in any given month. However, in this calendar year the Camry could almost take a month off and still stay ahead. No, for 2014 the Camry will remain number one. In 2015 the new Camry arrives, and if Toyota’s recent track record continues, it will put even further distance between itself and the pack.

Related Stories:
2015 Camry redesign carries on a long tradition of success
2015 Camry gets an extreme makeover
Toyota's Confirmation of Camry Changes in 2015 and Our Updated Predictions

Daniel wrote on June 9, 2014 - 2:38pm Permalink
I AM ON MY FIFTH CAMRY AND I WILL TELL YOU WHY. EXTREMELY RELIABLE. SMOOTH DRIVING CAR. COMFORTABLE SEATS. EXCELLENT MPG ON HYBRID. EXCELLENT RESALE. I CAN AFFORD ANY CAR I WANT BUT CANNOT BEAT THE CAMRY.
Dennis wrote on June 10, 2014 - 9:10am Permalink
You should mention that if you take out fleet sales to rental companies, Accord is the champ selling cars to actual people!!
John Goreham wrote on June 10, 2014 - 2:37pm Permalink
Fair enough. What is the total number of cars sold by Honda, less fleet cars in May and YTD, and same question for Camry, and what is your source?
Dennis wrote on June 10, 2014 - 6:57pm Permalink
Just goggle Honda Accord Fleet Sales....... This isn't really news!!! Honda doesn't have a fleet dept and focuses on individual customers which help keeps resale values high.
John Goreham wrote on June 11, 2014 - 1:10pm Permalink
Dennis, I like your point, but I did "Google it" hoping to find a source, but cannot. At times in the past the Accord's sales to private parties have been higher than Camry's. Historically, the Camry has sold about 15% of its cars to fleets, and fleet sales made up roughly 2% of the Accord's US sales. If that is still the case, the Camry is ahead of the Accord right now. The May sales numbers for both are in the story. The Camry is ahead by about 20%. I did the math and YTD the Camry still looks like the winner. If you have a source for both Camry and Accord fleet sales for May and YTD, paste a link here and I will take a closer look. I am a big fan of the Accord (I've owned 2), as is our Honda reporter. We'd love to do a story saying Accord is the car more families chose, but the facts we have to work with don't support that right now.
Nelson Scofield wrote on June 14, 2014 - 5:41am Permalink
Camry is the best aside from corrola.