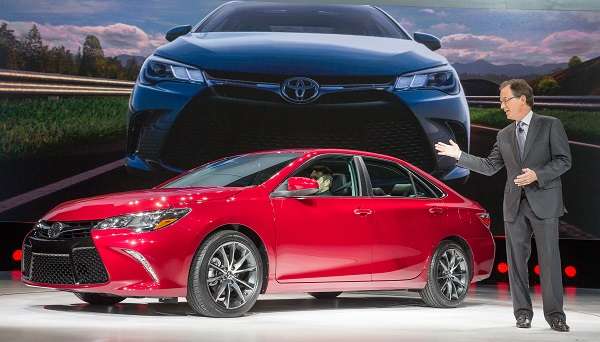 2015 Camry redesign carries on a long tradition of success

The 2015 Toyota Camry is restyled inside and out. What is not new is the Camry's mission to succeed.
Advertisement

The Toyota Camry has been completely redesigned outside and inside for the 2015 model year. The entire Toyota family of brands is moving in the direction of building cars that offer buyers heart-racing excitement. The Lexus line went first. When Lexus adopted its new styling on the GS sales doubled. Applied to the new IS line, sales went up by triple digit percentages. To say the new Lexus styling is a success is an understatement.

Now the bread and butter vehicles are being restyled at Toyota. The RAV 4 and Highlander are both all new and their sales went up by 50% and 25% respectively. The Avalon was fading away until its redesign and the sales of the larger Toyota sedan leapt by 140% after being restyled. Are you seeing a trend? The Camry is next and its look is no less dramatically different than any of these vehicles. The only difference is that the Camry is the single most important US vehicle to Toyota. Maybe that’s why it went last?

Speaking about the new 2015 Camry recently, Bill Fay, Toyota’s US general manager, laid out some powerful numbers. Starting with the fact that if the Camry was its own brand it would be one of the 10 largest in the automotive industry. Since its 1983 introduction Toyota USA has produced 10.2 million Camrys. 65% of those are still on the road today. Every hour of last year 50 families drove home a new Camry. The Kentucky plant that makes Camrys can make one every 65 seconds. Although it was not always the case, every single Camry sold in North America is now produced in the United States. Contrast that with the number of Chevy Camaros that are built in the US, which is zero.

In addition to the objective facts about why Camry is so important, Bill Fay also recounted a personal story. He explained that in 1997 while working in the Boston area, his family was hit by a driver that went through a red light. The Camry they were in was completely totaled, but none of the three family members was seriously injured.

Mr. Fay also answered the question “If Camry is so successful, why change it?” Simply put he said it is because customers expect more. So Toyota delivers more. The new car shares only its roof with the outgoing Camry and has 2,000 new parts. By the way 75% of all the parts of every Camry are produced in the US.

The 2015 Toyota Camry will arrive at dealerships this fall.