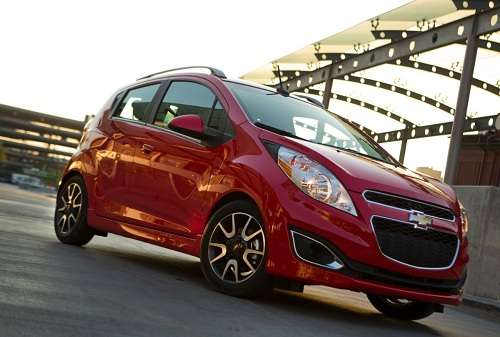 Do good things really come in small packages or are we just kidding ourselves? 5 reasons Chevy may finally break open the teeny car market in the US.
Advertisement

Can the 2013 Chevy Spark break the mini-car curse in the US? Mini-cars in the US have had almost zero success. In other markets that are car-oriented, such as the Japanese and German markets, the smallest cars in the line-up of many manufacturers are very popular. For example, both Audi and BMW have smaller offerings in their home markets that are thought of as both tiny and premium. Here in the States, tiny has always meant economy car. There are five factors that make this try by Chevy a little different from years past and gas prices are just one reason.

Style and Functionality
The 2013 Chevy Spark looks like a little pit-bull of a car. Many mini cars make the mistake of trying to look cute on purpose. That significantly limits the size of a potential market for a given model. The truism that you can sell a man’s car to a woman, but you cannot sell a woman’s car to a man is not a myth. The Spark has a tough looking front fascia, but it is the hidden rear doors that make the real design statement. The 15 inch alloy wheels would look small on most cars, but on this size car they add a pricey look.

Infotainment
Let’s face facts; Cars like the 2013 Chevy Spark in the US are often picked out by young adults, whether they pay the bill or not. Those are the most tech-savvy among us and they want the gadgets. The Sonic delivers on this. It has the Chevy MyLink system and the ability to incorporate internet radio and smart phone apps. This is the new technology. It also can come with On-Star, which isn’t old technology, but rather mature technology. This combination is formidable in a car at this price point.

Fuel Economy
The funny thing about fuel economy is that the smallest cars are no longer the leaders. Compact, and even mid-size cars now have the edge due to their superior aerodynamics and larger cost reserves for fuel saving technology. That said, the Spark is no slouch. 32 mpg combined is good.

A Quality Driving Experience
The 2013 Chevy Spark has incorporated many of the sound deadening features once found only luxury cars. Electronic stability control is now a part of all cars, but in tall, short, mini-cars it is more important as Mercedes and Smart learned when they first tried to enter this market with a tall tippy car. A firm suspension and tight turning radius will give the Spark a good zippy city-car feel.

Safety, Quality, and Reliability
Shoppers for the 2013 Chevy Spark will have to consider a larger used car as an alternative. At this price a used Civic or Corolla (or Fit and Yaris) are a real consideration. However, with a long bumper to bumper warranty, and given GM’s recent commitment to quality and reliability, the new 2013 Chevy Spark may win out in this area of consideration.

Mini-cars are a hard sell in the USA, but GM is bringing some new features to this underperforming market in the new 2013 Chevy Spark that may make buyers look twice.