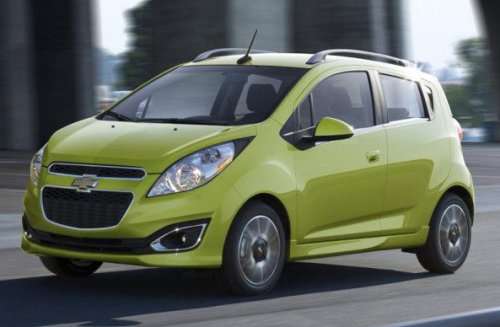 The official EPA fuel economy figures for the 2013 Chevrolet Spark have hit the internet and while the fuel economy numbers are solid – they are likely lower than General Motors had hoped when they planned to introduce the subcompact Spark to the US market.
Advertisement

The 2013 Chevrolet Spark with the standard 1.2L engine and a 5-speed manual transmission offers 85 horsepower while reaching fuel economy figures of 32 miles per gallon in the city, 38mpg on the highway and a combined figure of 34 miles per gallon. The 2013 Spark fitted with the optional automatic transmission gets slightly less impressive fuel economy with 28 around town, 37 on the highway and 32 combined. Those are all decent numbers for the Spark but after GM had mentioned a figure of 47mpg when the car debuted in 2009, the company likely expected to offer slightly better fuel economy.

Compared to the competition, the 2013 Chevrolet Spark is right at the upper range of the highway fuel economy figures with 38 miles per gallon. With 32 miles per gallon in the city and 34 mpg combined, the Spark trails the Scion iQ and the Smart fortwo in both of those categories but it should be noted that the Spark is quite a bit larger than the tiny Scion or Smart. In terms of interior space, the Chevy Spark is more like the Fiat 500 and while the Fiat packs more power – the Spark bests the Fiat in terms of fuel economy.

The 2013 Chevrolet Spark might not be the most efficient car in the class but with a starting price of just $12,245 – the Spark is the least expensive car in the class and the lowest priced car in the US automotive segment. When it comes down to it, being the least expensive car in the market will give the 2013 Chevy Spark a massive leg-up regardless of the fuel economy figures relative to the rest of the segment. The Spark is thousands less than the base model Scion iQ, the Fiat 500 and the Smart fortwo – the fact that it offers very similar fuel economy and more interior space could help the tiny Chevy flourish. Ultimately, those who opt for the 2013 Chevy Spark will likely consider the fuel economy a perk for an incredibly inexpensive new car rather than looking at the fuel economy as the main reason to buy the Spark.

Those who less worried about the price and who are looking to spend a little more money can get better fuel economy from the larger Chevrolet Sonic and Cruze Eco. While those two models offer just 33 miles per gallon combined in their most efficient configuration, the Sonic is able to hit 40mph on the highway while the Cruze Eco hits 42. Because of this, those prospective Chevy buyers who are more concerned with fuel economy (but cannot afford the $41,000 Chevy Volt) may lean towards the larger Sonic or Cruze but for those buyers looking for the least expensive new car possible – the 2013 Chevrolet Spark will deliver quality fuel economy and more space than the competition.

Elon Makes a Cybertruck Statement With an Action, But Quiet in Words
Tesla's Record Month in China: Doubled Registrations in March 2021
END_OF_DOCUMENT_TOKEN_TO_BE_REPLACED