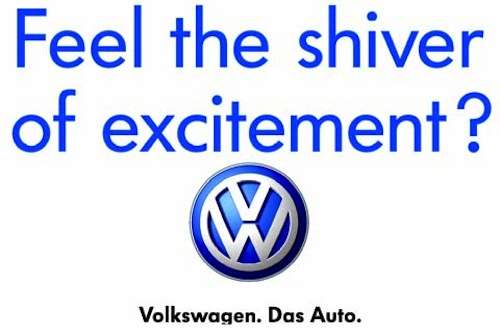 Don't ever accuse Volkswagen of not trying something different when it comes to marketing.
Advertisement

Volkswagen is no stranger to controversy when it comes to advertising. VW made news in July for ripping off an indie rock band’s song in their advertisement for the Polo and some may also remember the automaker’s divisive ad featuring a husband ignoring his pregnant wife in order to discuss his new Passat with a paramedic. Notwithstanding its contentious advertising past, VW may have outdone itself with its new “Feel the shiver of excitement?” campaign.

The German automaker is currently running a marketing campaign in India, which involves a tiny black vibrating box embedded in a newspaper. Although this marketing ploy may sound strange, it harkens back to an ad VW first launched in India two years ago. VW previously ran a full-page newspaper ad for its Vento (Jetta in America), which contained a tiny black plastic box. The box featured pre-recorded messages about the Vento.

Since the ad got people talking, VW has decided to up its game by introducing a vibrating box. The box is being used to promote the Vento and Polo in the automaker’s new four-page ad. The spread’s first page simply says, “Feel the shiver of excitement?” The remaining pages offer information about the cars, with the final page containing the vibrating box. The ad, which was launched on Tuesday, is presently featured in The Times of India, Hindustan Times and The Hindu.

According to Kothe, an innovative ad campaign was necessary to represent VW’s pair of pioneering vehicles. “The Polo and the Vento are our volume car lines here in India and are now packed with exciting new features like navigation system with rear view camera, Bluetooth, multi-function controls on steering wheel and much more at even more attractive prices – which is the reason for the excitement and therefore the essence of the innovation.”

Despite VW’s intentions, the reaction to its “Feel the shiver of excitement?” campaign has not been kind thus far. IPL CEO Sundar Raman, tweeted: “Shiver? Not something you wanna feel in a car! Innovation in execution, not the best copy.” Swapan Seth or Equus Red Cell added: The VW ad in today’s paper was such a waste of money! And an exceedingly tired idea.” Lastly, Russell Barrett of BBH India joked: “Putting husbands out of business. First a talking, now a vibrating newspaper.”

Nevertheless, VW’s new ad has gotten the attention of the press. What do you think of this marketing ploy? Is it innovative or unimaginative?