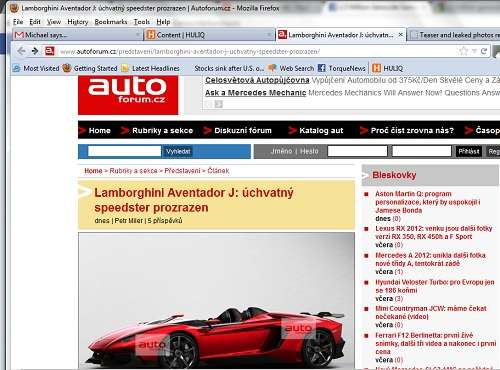 Although Lamborghini's official teaser tried to give consumers a heavily disguised sneak peak at the Unica, new leaked photos have let the cat entirely out of the bag.
Advertisement

Lamborghini has just released a teaser video for a new sports car titled the Unica. The Lamborghini Unica will make its debut next week at the Geneva Motor Show. The teaser clip confirmed recent murmurings that Lamborghini would unveil a second vehicle at the upcoming Geneva event. In addition to the official teaser, leaked photos have also surfaced, showcasing the Unica in all its glory. Lamborghini previously announced that they would introduce the Aventador Roadster at next week’s auto show.

Prior to the release of Unica teaser, experts had believed that Lamborghini’s second Geneva debut would be a production version of the Sesto Elemento, a two-seat, V10 high-performance concept car that debuted at the 2012 Paris Motor Show. New images from AutoForum.cz, however, illustrate that the Unica is a completely roofless Aventador. If true, the Unica would share Aventador’s 6.5-liter V12 engine. Along with having no roof, photos indicate that the Unica has no windshield or pillars.

Aside from the upcoming Unica and Aventador Roadster models, Lamborghini also has a new SUV waiting in the wings. The all-new Lamborghini MLC is set to make its debut at the Bejing Auto Show in April. It is speculated that the MLC will feature a returned version of the Gallardo’s V10 and a possible 584-horsepower. A possible MLC hybrid edition has also been bandied about, which could get over 600-horsepower. Production of the MLC is slated to begin in 2015.

For those interested, Unica an Italian word meaning “sole” or “the only.” The name continues Lamborghini’s longstanding tradition of bestowing unique names to their vehicles. The name of Lamborghini’s other new model, Aventador, has several meanings including “ventilator” and “winnower or one who separates chaff from grain.” It is also possible that Lamborghini named the vehicle after fighting bull like they have done in the past with the Gallardo and Murciélago.

Also known as Automobili Lamborghini S.p.A., Lamborghini was founded in 1963 by manufacturing mogul Ferruccio Lamborghini with the objective of making grand touring vehicles to compete with brands like Ferrari. Lamborghini was sold to Chrysler Corporation in 1987, but the partnership failed to result in any financial success. Audi, a subsidiary of Volkswagen Group, then purchased Lamborghini in 1998.

Despite poor sales due to the 2008 economic recession, Lamborghini has been on the upswing lately. The Italian automaker experienced a 23 percent sales gain in 2011, increasing global deliveries by 300 vehicles. Unfortunately for Lamborghini, rival Ferrari reported record sales in 2011. To put it in perspective, Ferrari sold 7,195 cars, which generated $2.96 billion in revenue, while Lamborghini enjoyed just $429 million in revenue, based on 1,602 vehicles sold.

Stay tuned for more information about the Lamborghini Unica and Aventador Roadster when they are revealed at the Geneva Motor Show held from March 8-18.

Nicolas Zart wrote on March 3, 2012 - 12:39pm Permalink
I'm probably not going to make a lot friends by saying this but finally a Lambo that looks really stunning. Not to say others don't look cool, or neat, or futuristic but they never really enraptured my heart, save for the beautiful Espada. This concept is moving and beautiful. Maybe Lamborghini will head down that road, as Ferrari did again a few years back bringing back beauty and aerodynamics.

Tesla Contemplates A New Strategy for China Retail even As Sales Boom
Jay Leno on Elon Musk & EVs: “I Think He Should Get ... Credit"
END_OF_DOCUMENT_TOKEN_TO_BE_REPLACED