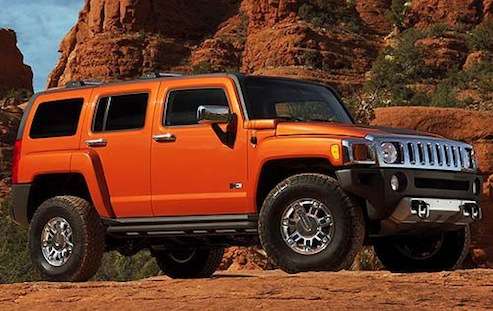 Though most Americans understand that Hummer H3s do not exhibit the best fuel economy, Rep. Allen West (R-FLA) is taking on President Obama due to the cost of fueling his 2008 Hummer.
Advertisement

Though it seems most Americans are sick of high gas prices, not too many have come forward complaining that it costs too much to gas up their Hummer. That is, until now. Rep. Allen West (R-FL) took issue with President Obama yesterday because of the high price at the pump. West drives a 2008 Hummer H3, which is one of the most notorious gas-guzzling vehicles ever. Steep gas prices not withstanding, surely West knows that the price he pays at the gas station is markedly higher than say, everyone.

“People have asked me before is there any area where I could praise President Obama? Certainly, he has an impeccable penchant for understanding the power of the bully pulpit. President Obama is also very adept at promulgating deceptive language masquerading as policy, actually just insidious political gimmickry. This ‘tax policy’ is an example as well as today's speech on his ‘energy policy’ shall be. Here is the bottom line, last night it took 70 dollars to fill the tank of my 2008 H3 Hummer, what is it costing you? What does it cost the President to fill his gas tank?”

In a radio address on Saturday, President Obama commented on the current state of affairs and promoted an “all of the above” approach in lowering fuel costs.

"We know there's no silver bullet that will bring down gas prices or reduce our dependence on foreign oil overnight," said President Obama. "If we're going to take control of our energy future and avoid these gas price spikes down the line, then we need a sustained, all-of-the-above strategy that develops every available source of American energy – oil, gas, wind, solar, nuclear, biofuels and more." In response to the singular “drill” approach, President Obama stated, "You know that's not a plan, especially since we're already drilling.”

Prior to being elected to the U.S. House of Representatives, West served in the U.S. Army in Iraq and as a civilian advisor in Afghanistan. After reaching the rank of lieutenant colonel, West decided to retire from the military in the wake of an ethics investigation into his conduct during a detainee investigation in Taji, Iraq. Perhaps it is West’s time spent in the armed forces that gave the congressman such an affinity toward Hummers.

Despite President Obama's argument, West will probably not trade in his garish H3 anytime soon. The H3 was introduced in 2005 and discontinued just five years later. Hummer sales began to decline worldwide during the 2008 economic collapse and never recovered. In a time when fuel economy is of utmost importance, the H3 gets just 15 mpg.

West, not one to shy away from controversy, has made a name for himself in Republican Party by bashing President Obama for anything and everything. Just last month, West made these disparaging remarks about the Obama Administration:

Aside from telling the President to get the hell out of America, West has also attacked Obama supporters saying: “I must confess, when I see anyone with an Obama 2012 bumper sticker, I recognize them as a threat to the gene pool.”

Don Bain wrote on February 25, 2012 - 7:07pm Permalink
it is said all points of view are valid... But how does someone completely lacking insight, civility or tolerance get elected in Florida? Hanging chads?
Anonymous wrote on April 20, 2012 - 7:04am Permalink
It seems like Florida is the new Texas with politicians equal in mental stature to Rick Perry.