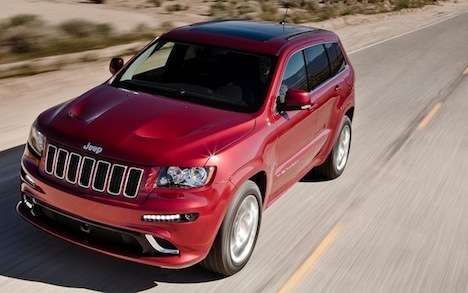 Jeep just earned its 2 millionth fan on Facebook, which is nearly 800,000 more than any other U.S. car brand. The 2 million figure represents fans of the brand itself and not any specific model.
Advertisement

The Jeep brand celebrated a landmark today as its Facebook page officially reached over 2 million fans. The figure, which currently sits at 2,017,131, is nearly 800,000 more than the closest U.S. automaker. It should be noted that although the Jeep nameplate has more Facebook fans than any other brand, their models, such as the Grand Cherokee and Wrangler do not have the most Facebook fans. Models from other car companies like the Ford Mustang and Chevy Camaro have garnered more than 2.9 and 2.4 million fans respectively.

"On behalf of the entire Jeep brand team, I would like to extend a personal thank you to our consumers -- and literally millions of fans -- for their continued loyalty and support," said Mike Manley, President and CEO of Jeep Brand, Chrysler Group LLC. "We are proud of our 70-year history and all that the Jeep brand has accomplished along the way. Jeep vehicle owners are unlike any others; from those who embrace the 'Jeep wave' to those who look forward to helping a fellow off-roader along the trail, there is a sense of community and passion among Jeep owners that makes our brand unique."

Part of the reason for Jeep’s Facebook dominance is its unique interactive features and contests. Jeep’s current Arctic Yeti Dig contest gives visitors the chance to win a 2012 Jeep Wrangler Artic Edition, featuring Mopar Black Fuel Filler Doors and 17-inch Painted Black Wheels. The automaker is also running the Jeep “Name My Ride” Contest, where one lucky winner gets a 2012 Grand Cherokee. Aside from various contests, Jeep’s Facebook also includes the Adventure 101 campaign in which Jeep owners can submit videos and photos of their various Jeep-related driving exploits.

Founded in 1941 as a Chrysler marquee, Jeep SUVs were originally used as lightweight four-wheel-drive vehicles during World War II. Jeep first introduced civilian vehicles in 1945 and has since become an industry leader in craftsmanship and versatility. According to Jeep, their brand aims to “deliver an open invitation to live life to the fullest by offering a full line of vehicles that continue to provide owners with a sense of security to handle any journey with confidence.”

The current Jeep lineup includes Compass, Grand Cherokee, Liberty, Patriot, Wrangler and Wrangler Unlimited. Jeep makes each of their vehicles available outside of North America in right-hand drive versions with gasoline and diesel options. Jeep’s 2012 Grand Cherokee has garnered numerous accolades including being named a Consumer’s Digest Best Buy, IIHS Top Safety Pick and was awarded a Five-Star Government Crash Test Rating. All told, the Grand Cherokee is the most awarded SUV of all time.