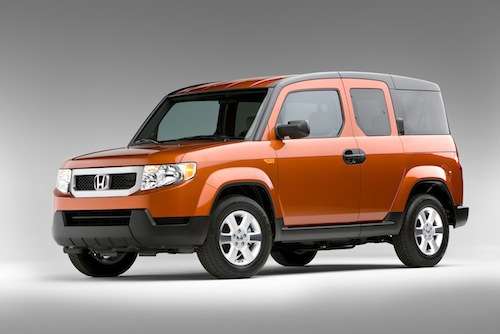 The recall, which involves just over 5,000 vehicles, was issued to fix a trailer hitch wiring harness defect.
Advertisement

Honda has announced the recall of 5,216 model year 2007 through 2011 Element crossover SUVs due to a trailer hitch wiring harness problem. Although the vehicle’s wiring harness is supposed to supply power to the trailer’s turn signals, this is not the case with the affected Element SUVs.

Specifically, the wire that is intended to power the turn signal unit was inadvertently switched with the stomp lamp wire. As a result the turn signals will only illuminate when the brake lamps are illuminated. Consequently, the driver cannot properly use his or her turn signals, thus increasing the risk of a crash. The defect puts Honda in violation of Federal Motor Vehicle Safety Standard No. 108, “Lamps, Reflective Devices, and Associated Equipment.”

Honda will begin notifying customers of the recall on, or about, September 20, 2012. Owners will receive wiring repair, free or charge. In the meantime, owners may contact Honda at 1-800-999-1009. Honda’s recall campaign number is S53. Concerned customers may also contact the National Highway Traffic Safety Administration Vehicle Safety Hotline at 1-888-327-4236 or go to www.safercar.gov.

The announcement marks the first time the Element has been involved in safety recall since August 2011 when it was part of a massive recall of 1.5 million Honda vehicles. The recall, which also included Accord and CR-V models, was issued to reprogram the transmission control software.

The Honda Element was a compact crossover SUV, produced from 2003 to 2011. The Element was well known for its distinct cubist design and versatility. The vehicle was intended to appeal to outdoor enthusiasts like surfers and cyclists, because of its generous cargo room. The Element was also popular amongst city dwellers that liked how easy it was to park.

Though it is no longer in production, Edmunds.com recommends used Element SUVs due to its roomy interior, even four-cylinder engine, balanced handling, and reliability. If you are in the market for a used Element, Edmunds urges consumers to opt for the 2007 and newer versions. New models offer more power and include more safety features, according to Edmunds.