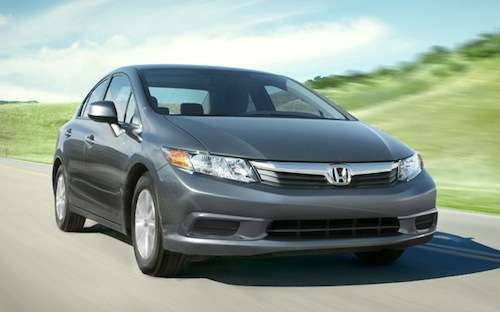 The recall comes just one month after Honda recalled 1,156 2012 Civics for a fuel leakage issue.
Advertisement

Honda has announced the voluntary recall of roughly 50,000 model year 2012 Honda Civic vehicles due to a potential driveshaft problem. In particular, the left driveshaft (driver’s side) may be improperly assembled, which may cause it to separate from the outer CV joint. Such separation would result in the car being unable to move in any gear. Additionally, the vehicle may roll away if the parking brake is not correctly applied. No crashes or injuries have been reported thus far, according to Honda.

Recall notices will be mailed out beginning in late-June 2012. Honda encourages owners of affected Civics to bring their vehicle to an authorized dealer immediately after receiving a recall notice. Civic models requiring repairs will be serviced free of charge. Customers that do not wish to wait until late-June may contact Honda Customer Service at 1-800-999-1009 or online at www.recalls.honda.com. Concerned drivers can also learn more about the recall by contacting the National Highway Traffic Safety Administration online at www.safercar.gov or by phone at 1-888-327-4236.

The news marks the second time Honda has issued a safety recall on the 2012 Civic this year. The automaker also recalled 1,156 2012 Civic vehicles last month because of a fuel leak issue. According to the NHTSA, “There is a possibility that an O-ring, which seals a connection in the fuel feed line, is misaligned. If the O-ring is misaligned, a small fuel leak may occur. Fuel leakage, in the presence of an ignition source, could result in a fire." Despite the fire possibility, Honda stated that no injuries or fires were reported associated with the defect.

Despite the Civics eternal popularity, the 2012 model has received mixed reviews from the automotive community. The 2012 Civic ranked 27 out of 41 on U.S. News Rankings and Reviews list of Affordable Small Cars. The vehicle earned just a 7.7 overall score based on 16 published reviews and test-drives. For the most part, reviewers were unhappy with the Civic’s 2012 redesign, calling it “lackadaisical.” Furthermore, U.S. News reports, “The competition is priced lower and outshines the Civic in almost every way.” Specifically, the 2012 Civic received much of the criticism for its “boring exterior styling, lackluster interior and high base price.”

Fortunately for the Civic, not all reviews were bad. The 2012 Honda Civic did earn some praise for its improved fuel economy, new i-MID technology and Standard Vehicle Stability Assist. The all-new Civic also performed quite well in regard to safety ratings, earning an Insurance Institute for Highway Safety “Top Safety Pick” honor.