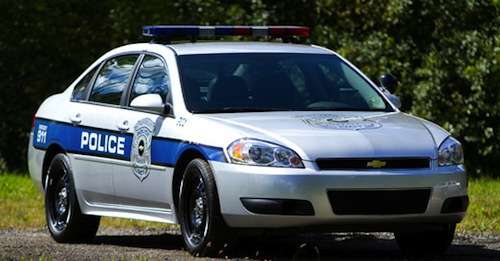 The recall, which affects 36,413 vehicles in the U.S., comes one day after GM recalled 1,713 Impala police sedans in Canada.
Advertisement

General Motors has just announced the recall of 36,413 model year 2008-2012 Chevrolet Impala Police Sedans sold in the United States. The recall comes just one day after GM issued a recall for 1,713 Impala Police Sedans in Canada. Both recalls were issued due to a problem with the vehicle’s front lower control arm. Specifically, the control arm may fracture and separate from its bushing sleeve. Consequently, drivers may experience reduced steering control and changes in handling. Recall notices indicate that tire squealing and/or chirping during turns may also be a lesser side effect.

The automaker reports that the recall only concerns Impala patrol cars. “There is no recall of any field action on non-police (civilian) Impalas now or in the works, said Alan Adler, Chevrolet spokesman to Autoblog. “Analysis was done to understand the durability in non-police Impalas and showed the control arms used in the base Impalas will exceed GM Engineering durability requirements.

GM is scheduled to begin notifying customers of the recall on Aug. 21, 2012. Affected vehicles will receive right-hand and left-hand front lower control arms, free of charge. There have been no crashes, injuries or deaths associated with the problem, according to GM.

The 2012 Chevrolet Impala Police Sedan features segment-leading acceleration and top speed thanks to its 3.6L V6 engine, which produces an estimated 302 horsepower. In terms of fuel economy, the Impala police cruiser boasts an EPA-estimated 28 MPG highway, a 4 MPG improvement over the 2011 model.

Aside from the police issue Impala, Chevrolet also makes the 2012 Chevrolet Caprice PPV and Detective and the 2012 Chevrolet Tahoe 2WD PPV. Unlike the Impala, the Caprice is available in either a 3.6L V6 engine or 6.0L V8 engine. Geared toward patrol and special needs applications, the Tahoe PPV is ideal for HAZMAT, K9, Medical First Responder and tactical operations.