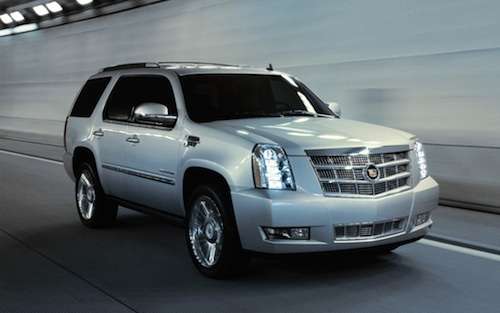 General Motors Co. announced Friday that is recalling over 69,000 new SUVs, pickups and vans due to a dangerous roll away risk. The recall affects the 2013 Cadillac Escalade, Escalade ESV and Escalade EXT; Chevrolet Avalanche, Express, Silverado HD, Silverado LD, Suburban and Tahoe; and GMC Savana, Sierra HD, Sierra LD, Yukon and Yukon XL. All vehicles were manufactured from November 7, 2012 through December 18, 2012. The recall covers 54,686 vehicles in the United States, 6,310 in Canada and 710 in Mexico. Another 7,038 vehicles overseas are also affected, according to GM spokesman Alan Adler.

According to the National Highway Traffic Safety Administration, the affected vehicles do not meet a federal requirement requiring transmission shift interlocks. Specifically, GM vehicles may have been built with a broken park lock cable or a misshapen steering column lock actuator gear in the lock module assembly.

The Detroit automaker discovered the problem at its Arlington Assembly plant on Dec. 14. GM says that there have been no injuries reported in association with the problem.

In October, BMW recalled certain model-year 2005-2008 BMW 7-Series luxury vehicles due to a transmission defect, which posed a roll away risk. Unlike the GM safety recall, BMW’s transmission control problem was due to the vehicle’s engine start/stop button. The recall affected more than 45,000 cars.