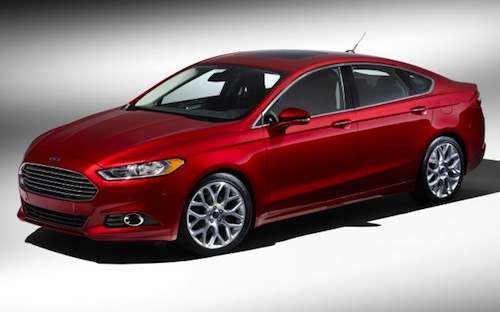 Ford's latest recall comes just over a week after the automaker recalled the 2013 Fusion for a dangerous fire-related recall. Friday's problem, which affects over 20,000 vehicles in North America, particularly concerns a headlight projector coating defect.
Advertisement

For the second time in two weeks, Ford has issued a recall on the 2013 Ford Fusion. This time around, the recall affects the Fusion was recalled due to a headlamp defect. Documents filed by Ford with the National Highway Traffic Safety Administration indicate that certain Fusion sedans fail to meet the requirements of Federal Motor Vehicle Safety Standard (FMVSS) number 108, “Lamps, Reflective Devices, and Associated Equipment.”

The affected models may not contain proper headlight projector coating, which may lead to “hazy” headlight projection. Consequently, driver visibility becomes decreased – thus increasing the risk of an accident. Affected Fusion vehicles were manufactured from February 3, 2012 through October 20, 2012. The Ford Fusion recall affects 19,106 Fusions in the United States and an additional 1,098 vehicles in Canada. The automaker identified the problem in early October 2012. Ford also announced that there have been no accidents attributed to the defect.

As previously mentioned, Friday’s recall comes just over a week after Ford recalled 2013 Ford Escape SUVs and Ford Fusion sedans due to fire risks. According to the recall notice, certain vehicles may experience engine overheating, which may lead to fluid leaks. As a result, a fire may occur if the leaked fluid comes in contact with an ignition source like hot exhaust steam. Ford’s safety recall concerns 73,320 Escape SUVs and 15,833 Fusion sedans.

Unlike Ford’s current safety recall, there have been 13 fires reported in relation to the Escape/Fusion recall. The dangerous defect has been so widespread that the automaker decided to launch a task force in November to further probe the problem.

Aside from the pair of recalls, the 2013 Ford Fusion earned some positive attention late last month when it earned Green Car Journal’s “Green Car of the Year” award at the 2012 Los Angeles Auto Show. The vehicle earned praise for its reduction of CO2 emissions, petroleum use and impact on environmental improvement. The Fusion bested an impressive field of green vehicles like the Dodge Dart, Ford C-Max, Mazda CX-5, and Toyota Prius c.