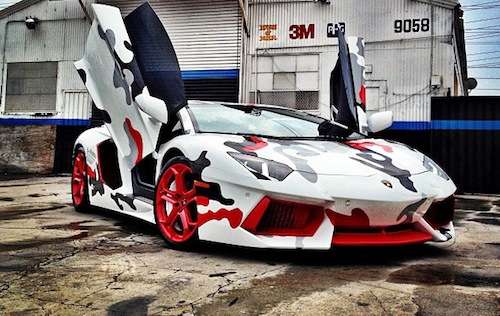 Singer Chris Brown has decided to ruin his Lamborghini Aventador by wrapping it in red, white, and black camouflage.
Advertisement

Some things are better left untouched. This phrase could not be any more true when in reference to a Lamborghini. Although the Lamborghini brand is synonymous with exotic performance and its already one-of-a-kind appearance, it cannot satisfy everyone.

Take singer Chris Brown for instance. The “Girl You Loud” singer has purchased several Lamborghini sports cars in recent years, and has decided to ruin them all with hideous paint jobs beginning with customizing his Gallardo to look like a P-51 fighter plan in 2011.

Keeping with the military theme, the pop star recently turned to the California-based JC Customz to wrap his Lamborghini Aventador in red, white and black camouflage. Check out JC Customz on Instagram for more photos.

As previously mentioned, Brown has a long history of “improving” the look of his cars. Earlier this year, the “Can’t Say No” singer had West Coast Customs modify his Gallardo to look like a real-life Hot Wheels car. Dubbed “El Toro” by Brown, the look is actually modest compared to the World War II fighter plane look. Aside from the paint job, WCC added a set of Asanti wheels and modified the vehicle’s front bumper intakes. Click HERE to check out Brown’s ride.

Despite his love for all things Lamborghini, Brown's car collection also includes several other luxury brands. The singer is also the proud owner of multiple Porsches, including a 911 Turbo S and a Panamera, which has been heavily modified. In fact, Brown upped the normally 3.6L V6 Turbo engine to a 4.8L V8 with a top speed of 198 mph. The Panamera reportedly cost Brown nearly $1.9 million.

Aside from Porsche, Brown owns a vintage 1968 Chevrolet Impala, which he has outfitted with a domed retractable roof and chromed faux air extractor gills.

Brown recently made headlines while driving in one of his other high-profile vehicles: a deluxe edition Range Rover. In May, Brown was involved in traffic accident while driving his Range Rover in San Fernando Valley. The singer allegedly rear-ended a car stopped at a red light and then refused to give his license or insurance information to the other driver. Last week, a judge revoked Brown’s probation due to the incident, but did not send him to prison. Another hearing is set for Aug. 16.