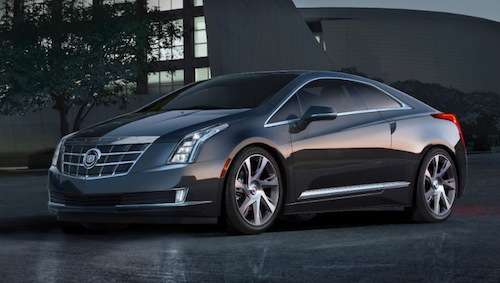 The newly unveiled 2014 Cadillac ELR has earned the EyesOn Design award, an honor which the ELR's concept model won back in 2009. The ELR beat out several impressive vehicles including the 2014 Chevrolet Corvette Stingray.
Advertisement

One day after its highly touted debut, the 2014 Cadillac ELR has received the annual EyesOn Design award for the best production car at the North American International Auto Show. In order to win top spot, the ELR bested several vehicles including the Audi RS7, BMW M6 Gran Coupe and all-new Chevrolet Corvette C7 Stingray. Interestingly, Cadillac snagged the EyesOn Design award for Best Concept Vehicle of 2009 with the Converj, the concept version of the ELR.

Based on the Converj concept, the Cadillac ELR is an extended-range hybrid, which incorporates the same propulsion system as the Chevrolet Volt. The ELR touts a lithium-ion battery pack, 120-kilowatt electric motor and a four-cylinder engine-generator, which are collectively known as General Motors’ “Voltec” electric propulsion system. The ELR uses the same GM Delta II platform as the Chevy Volt, Cruze and Buick Verano.

Cadillac has not confirmed the ELR’s 0-60 acceleration time, but did announce that it boasts a top speed of 100 mph. The vehicle’s electric only range is rated at 35 miles, while its extended range engine can take the ELR up to 300 miles. Also, the ELR can be recharged in 4.5 hours with a dedicated 240V outlet or 5.5 hours with a 120V outlet. The 2014 ELR possesses four driving modes: the default Tour mode; Mountain mode; Hold mode to use the gas-powered electric generator and Sport Mode.

As for the ELR’s distinctive design, the plug-in vehicle boasts sweeping body lines, aggressive forward-leaning profile and striking 20-inch wheels. The ELR’s interior contains a classic 2+2 layout, which is designed to be luxurious and comfortable. Not only does the ELR boast leather-trimmed features with chrome and wood accents, it also features a sueded microfiber headliner and optional carbon fiber trim.

The ELR also touts a laundry list of safety features including electronic stability control, a lane departure warning system with rear cross-traffic alert and adaptive cruise control. Cadillac also outfitted the ELR with a unique Safety Alert Seat, which will vibrate parts of the seat in conjunction with auditory safety warnings if activated.

GM has not announced pricing details, but the automaker did previously indicate that the ELR would cost less than the $57,400 Tesla Model S. That being said, a newly published Motor Trend report suggests that initial price estimates may have been $10,000 too low. Cadillac previously announced that the ELR will go into production later this year.