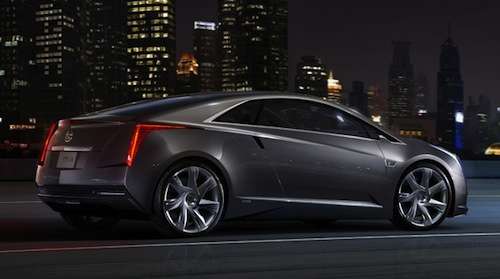 The Cadillac ELR plug-in hybrid is based on Cadillac's Converj concept.
Advertisement

Although the Chevy Volt recently posted its best monthly sales ever, the plug-in hybrid will soon face some stiff competition from a new luxury sibling. General Motors announced today that the Cadillac ELR plug-in hybrid would go into production late next year. The upcoming ELR coupe is based on the Cadillac Converj concept, which debuted at the Detroit Auto Show in 2009.

Plans for the Cadillac ELR were announced on Tuesday at an industry conference in Detroit. “The ELR will be in a class by itself, further proof of our commitment to electric vehicles and advanced technology,” said Mark Reuss, GM’s North American president. “People will instantly recognize it as a Cadillac by its distinctive, signature look and true-to-concept exterior design.”

Details on the ELR have been sparse thus far, but Cadillac did say that it would contain a T-Shaped battery pack and four-cylinder engine/generator like the Volt. If the Converj concept is any indication, the forthcoming ELR may feature a 120-kilowatt electric motor and four-cylinder engine-generator. GM has not divulged the ELR’s expected fuel economy, but it should be in line with the Converj’s all-electric range of 40 miles.

As for production, the Cadillac ELR will be manufactured at the Detroit-Hamtramck plant, which also makes the Volt and its foreign counterparts the Opel Ampera, the Vauxhall Ampera and the Holden Volt. Production of the Volt and its sibling models resumed on Monday after being shut down for four weeks.

The ELR’s addition to the Detroit-Hamtramck plant represents a $35 million investment from GM, which has invested a total of $561 million in the plant since December 2009. The factory also manufactures the Chevrolet Malibu.

GM hopes that ELR sales will help catapult the company back atop the U.S. luxury auto segment, where it has not been in 15 years. GM’s luxury brand sales rose by 3.7 percent in 2011 to 153,000, which is only 63 percent of BMW’s sales. As of September 2012, Cadillac’s sales are down 8.6 percent compared to last year.

Cadillac recently introduced the Cadillac ATS in order to compete with luxury leaders like the BMW 3-Series and the Mercedes-Benz C-Class. The 2013 ATS was recently honored by Esquire magazine as the 2012 Car of the Year.

Robert L. wrote on October 19, 2012 - 6:42am Permalink
This car looks fantastic but I want an all electric vehicle that can go way farther. Please redesign an all electric that can go 300 miles on a single charge. 38 miles is not enough for someone like me who drives more than 110 miles a day. If Tesla can do it with a single speed transmission, why can't GM give us one with a multispeed transmission that will save electricity at highway speeds. Or how about trying to push for hydrogen power? Design a hydrogen generator at home where we can make our own from water and electricity. Come on GM, give us something groundbreaking. I know you have a lot of people who have a lot of good ideas so give them a chance to use their ideas to give the consumer what they want.