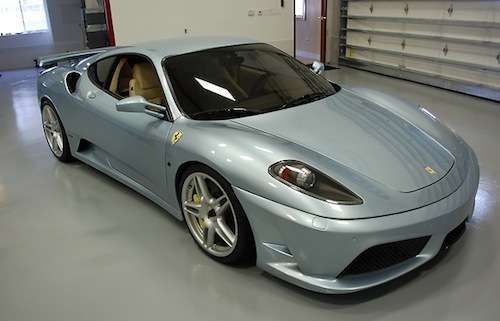 NBA All-Star Andrew Bynum is looking to sell his custom 2009 Ferrari Supercharged Coupe and has turned to eBay Motors to do so.
Advertisement

Aside from its celebrity association, what makes this Ferrari so special? Well, Andrew Bynum’s former ride, a Ferrari F430, features nearly every upgrade imaginable from Novitec. In fact, the supercar boasts more than $200,000 in upgrades alone.

Despite once being worth over $400,000, the luxury sports car can be yours for nearly half price. There are currently 10 days left to purchase the vehicle at its Buy It Now price of $209,000. As per seller’s request, a deposit of $200 must be paid within 24 hours of auction close. Full payment is required within 7 days of auction close.

Selected 10th overall by the Los Angeles Lakers in 2005, Bynum is a two-time NBA Champion and current center for the Philadelphia 76ers. Bynum posted his best season as a pro last year averaging 18.7 points, 11.8 rebounds and 1.93 blocks with the Lakers. Despite his All-Star season, Bynum was traded to the 76ers after the 2011-2012 season as part of a four-team deal that sent Dwight Howard to the Lakers.