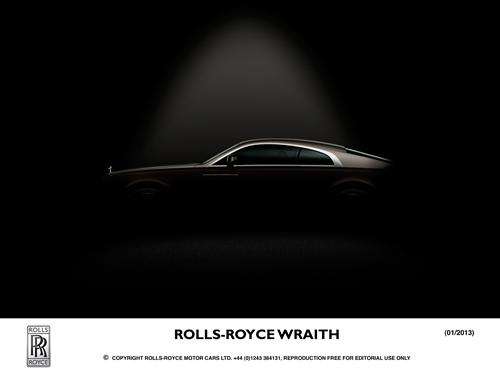 Britain's luxury coachmaker, Rolls-Royce, will be debuting it's all-new Wraith at the upcoming Geneva Motor Show and promises it will be the most powerful Rolls ever made.
Advertisement

Rolls-Royce Motor Cars will be debuting their all-new 2014 Rolls-Royce Wraith at the Geneva Motor Show in March. Details of the revival of one of Rolls' oldest models are still sketchy, but it will be the most powerful car the company has ever produced.

First deliveries of the new Wraith will appear in the fourth quarter of this year, promised Torsten Muller-Otvos, CEO of Rolls-Royce Motor Cars. A teaser image of the car was released to hint at the new design for what will become the company's flagship.

“Expect the boldest design, the most dramatic performance and the most powerful Rolls-Royce that has ever played host to the famous Spirit of Ecstasy figurine," said Muller-Otvos. "We will present a model whose starting point is luxury, refinement and exclusivity, traits that have made Rolls-Royce the world’s pinnacle luxury good for the last 108 years."

The silhouette image released (at right) promises a sleek, low-profile and dynamic coupe. Far removed, but very contemporary with the original Wraith. That car was built in 1938 and 1939 at the Rolls Derby factory and then sold as a running chassis to independent coachbuilders of the day. It used an inline six-cylinder, overhead valve, 4257cc engine with a cross-flow cylinder head. It's four-speed gearbox had synchromesh on the top three gears - a truly luxurious addition in that day.

This new 2014 Wraith will be reviving that original name, but be built as a two-door coupe version of the Ghost. Spyshots of the Wraith published in British automotive press show a car that is very much like the Ghost in shape, though body coverings prevent detailed analysis, of course.

Additional information on the upcoming Wraith has been promised through February as a lead-in towards its official unveil in early March.

"When Wraith is present, for that fleeting moment, the world will stand still."