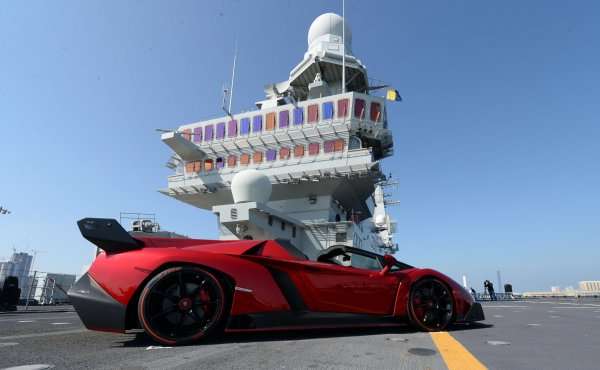 Lamborghini Veneno Roadster unveiled in the most exclusive way possible

How do you unveil a new Lamborghini? On an aircraft carrier, of course. The world premier of the Lamborghini Veneno Roadster happened in Abu Dhabi on the Marina Militare's Portaerei Cavour.
Advertisement

Let's say that you're one of the world's most exclusive supercar makers and you are unveiling the most exclusive roadster you've released in years. Where do you unveil it?

Well, if you're Italian and your name is Lamborghini, then you do it on your nation's most powerful flagship, which also happens to carry the very thing you'd most like your car compared to: fighter jets. Hence the beautiful new, and very exclusive, Lamborghini Veneno Roadster was unveiled in port on the deck of the Italian navy's flagship aircraft carrier the Nave Cavour, officially called the Marina Militare's Portaerei Cavour.

The event had several facets. Lamborghini had the new car to show off to the world, Italy had chosen the company as the official representative of the Italian motor industry for the United Arab Emirates, and the market in Abu Dhabi is one of the carmaker's largest outside of their home turf.

A small, exclusive party was hosted by the ship's crew, Admiral of High Seas Forces Paolo Treu, and His Excellency Giorgio Starace, Italian Ambassador to the UAE. Famed chef Corrado Corti of Italy's Hotel Splendido in Portofino was flown in to provide hospitality for the occasion and VIPs from the UAE and Italy including singer and actress Elena Bonelli and 2006 world soccer champion Fabio Cannavaro.

The Lamborghini Veneno Roadster, of course, was the star of the show once unveiled. It's fully road legal, but has the aerodynamic profile of a racing prototype. Only nine of these will be made in 2014, and all with a price tag starting at 3.3 million Euros, not including taxes.

The V12 Veneno Roadster does 0 to 100 km/h (0-62 mph) in just 2.9 seconds, produces 720 horsepower (552 kW), and has a top speed of 355 km/h (220.5 mph). The display version for this event was painted in classic Lambo red, called Veneno Rosso here, but those lucky few who purchase a Veneno Roadster will be able to choose any color they'd like, custom or off the shelf from Lamborghini, when they purchase their car. Obviously these will be sold well before they see any showroom.

The Lamborghini Veneno Roadster is a true roadster, fully open top with just a rollbar. Aerodynamics were the top priority for the car's design. This creates downforce for the car's enhanced performance. The 6.5-liter V12 is mid-mounted and cooled through aerodynamic vents that both improve down- and side-force and allow intake for the engine and brakes. A smooth underbody and the rear fender division complete the race-ready package. The visible air vents ahead of the adjustable rear wing actually push the air they do not intake up to the wing.

Even the exclusive alloy wheels were designed to aid aerodynamics with the carbon fiber ring around the rim acting as a turbine to throw air into the brakes, which are, of course, carbon-ceramic discs. The bodywork is a carbon-fiber reinforced monocoque of polymer.

The Veneno Roadster is fully road legal worldwide with all of the safety and other systems required by law in each jurisdiction. Dry weight of the car is just 1,490 kilos (3,278 pounds), giving it a power-to-weight ratio of a stunning 1.99 kg/hp (4.38 lb/hp).

So, ya, if you have a car like this to show off to the world, I think an aircraft carrier is definitely a good place to do it. Wow.

Tesla Contemplates A New Strategy for China Retail even As Sales Boom
Jay Leno on Elon Musk & EVs: “I Think He Should Get ... Credit"
END_OF_DOCUMENT_TOKEN_TO_BE_REPLACED