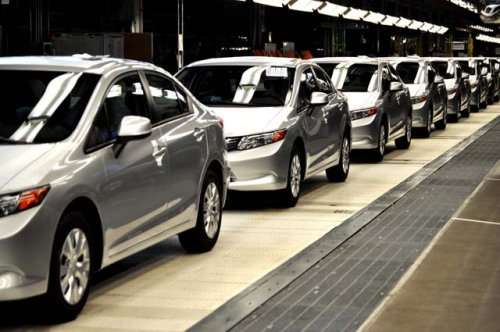 Honda's Greensburg, Indiana plant is adding a $40 million boost in order to increase production by 25%, hiring more American workers as well as adding the high-selling Civic Hybrid to the line. Honda already began a second shift last year and the plant currently produces many of Honda's alternative fuel vehicles.
Advertisement

Honda Manufacturing of Indiana (HMIN) will be investing $40 million into their facility to add another 300 jobs and boost production by 50,000 units to 250,000 total. The new capacity will be reached sometime early next year.

Honda is adding the Civic Hybrid to the lineup of vehicles being produced at HMIN. The Civic is one of the company's most popular models in North America and the Civic Hybrid is its best-selling hybrid car. The Indiana plant already produces the Acura ILX Hybrid, Civic gasoline model, as well as the Honda Civic Natural Gas.

The Indiana plant opened about four years ago and has quickly grown to become one of the company's largest production facilities. Honda maintains seven manufacturing plants in North America, all of which are operating at or above full capacity, for a total of 1.63 million vehicles annually. Last year, Honda added a second shift to the Indiana plant and resumed a second shift at its Marysville, Ohio plant as well. Its Alabama plant is nearing its capacity of 340,000 trucks per year (up from only 40,000 in 2011). All of these additions mean Honda North America will be producing about 1.72 million vehicles annually in this region. That will boost to 1.92 million when Honda's new plant in Mexico goes online to produce the Fit subcompact for 2014.

"Increasing production in Indiana will provide us with increased flexibility to adjust model mix at our other plants in North America," Senior Vice President Bob Nelson said in a press release, noting that Civic models also are manufactured at Honda of Canada Mfg., in Alliston, Ontario, which is producing the popular CR-V. "All of our plants build multiple models on the same lines, so our ability to adjust between models and among plants allows us to optimize use of our production capacity."

In 2011, 85% of the Honda and Acura automotive lines sold in the U.S. were made in North America, says Honda. That's the highest rate of any international automaker and Honda expects that number to increase to 90% in the coming years. Honda's first plant opened in Marysville, Ohio in 1982, making this its 30th anniversary building vehicles in the U.S.

Honda is accepting job applications for the Indiana plant at Indiana.Honda.com.

Tesla Contemplates A New Strategy for China Retail even As Sales Boom
Jay Leno on Elon Musk & EVs: “I Think He Should Get ... Credit"
END_OF_DOCUMENT_TOKEN_TO_BE_REPLACED