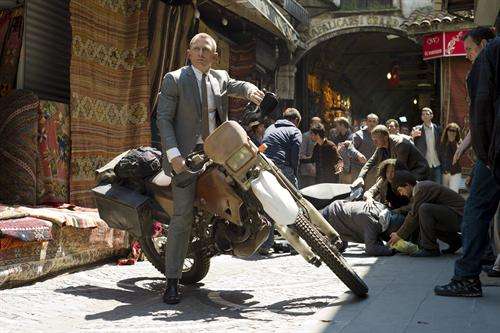 The new James Bond movie, Skyfall, is nearing release from production and Honda has revealed exclusive behind-the-scenes information about their collaboration with the film and its star, Daniel Craig. Plus how you can win a Bond Experience courtesy of 007 and Honda.
Advertisement

The latest in the James Bond franchise, Skyfall, will once again star British actor Daniel Craig and the very first scene in the movie will showcase him in his Bond role riding.. a Honda CRF250R.

Gear heads are usually big Bond fans as the films feature three things we all love: awesome action, mischievous plot lines, and lots of eye-grabbing vehicles. This latest Bond extravaganza will begin with James hurling through a Turkish bazaar on a Honda CRF250R motorcycle.

A total of twenty of the motorcycles were commissioned for the film, modified in various ways to fit the authenticity of the shot or to handle whatever extreme stunt the bike would be required to accomplish. Chris Corbould, whose award-winning special effects team was tapped for the many of the film's action sequences, put together Skyfall's opening chase scene on location in Istanbul and Adana, Turkey earlier this year.

Of course, this being a Bond film, it wasn't good enough to just race motorcycles through the streets and sidewalks.. no, much of 007's seek and destroy from the back of a CRF250R happens on rooftop.

Want to see more? Go to the Honda UK Skyfall website (honda.co.uk/campaigns/2012/skyfall/) and you can see behind-the-scenes "making of" footage of the chase scene in question. You can also enter to win their Bond Experience Weekend contest.

Skyfall will release on the 50th anniversary of James Bond as 007. To celebrate that and their collaboration with this historical film event, Honda is giving away a Bond Experience Weekend to one lucky winner. The weekend includes stay at the luxurious Corinthia London hotel, dinner at the world-famous OXO Tower restaurant, time with an expert bartender to learn to make 007-style martinis, a Honda powerboat experience on the Thames, and a "secret tour" of London.

A silent auction for the modified CRF250R used by henchman Patrice in the film will be held at a future date. Proceeds from the auction will go towards Honda's three UK-based charities, NSPCC, Greenfingers and Nationwide Association of Blood Bikers (NABB).