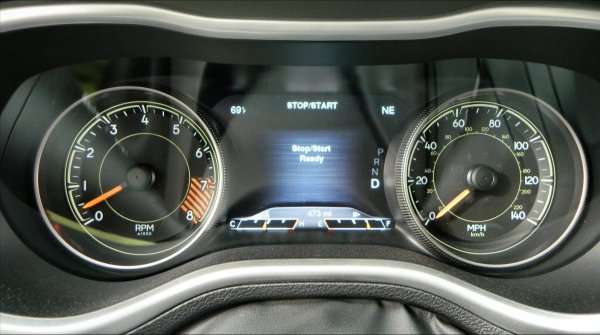 Hands On with the 2015 Jeep Cherokee Stop/Start system

At a recent Jeep event, we went hands-on with the 2015 Jeep Cherokee with its new stop/start system to improve fuel economy. Find out how it stacks to some of the competition's similar systems.
Advertisement

While at high altitude in Colorado, we drove the new 2015 Cherokee on a brief course designed to showcase the engine Stop/Start system. We took full advantage of the chance to use it in various scenarios and compare it to other vehicles with similar technology that we've driven in the past. While the Cherokee's may not be the best we've seen, it certainly is high up the list of favorites.

Funny enough, the chance to try this came as a side note to an event meant to showcase the new Jeep Renegade, which you can read about here. We were asked by Chrysler representatives to keep quiet about the Start/Stop tech we sampled, however, until today, for marketing reasons.

How Stop/Start Works
Now, we're free to give you our driving impressions, analysis, and thoughts on this system as it compares to others. To begin with, briefly, a Stop/Start system simply shuts off the engine when the vehicle is stopped and automatically starts it again when it's ready to go again. It's a relatively simple improvement that requires only a more robust starter and a few electronic controls to implement, but it can greatly improve fuel economy in the city where vehicles stop-and-go often.

In most vehicles, including the 2015 Jeep Cherokee we focus on today, the Stop/Start system works by simply turning the engine off when the vehicle is stopped, such as at a stop light or in traffic. When the driver lets go of the brake pedal, the engine is automatically started up again. It's a popular feature on most hybrid vehicles and is not proliferating into standard gasoline engines as well. A few things may pre-empt the Stop/Start system, such as climate control requirements, a low battery, engine faults, and so forth.

How It Feels in the 2015 Cherokee
For the most part, the Stop/Start system in the Cherokee is automated. We drove the Limited 4x4 model with a 3.2-liter V6 and new 9-speed automatic transmission. This 2015 Jeep Cherokee was well-equipped at $38,760, delivered. The Stop/Start engaged as soon as we brought the Cherokee to a complete stop at our first intersection on the course. The delay is roughly one second in length between a soft, comfortable stop and the engine turning off. The delay to re-start was a little less than that, happening as soon as the driver's foot is lifted from the brake pedal.

At a hard stop, the delay to turn off the engine is a bit longer, not happening until the vehicle is at a fully motionless state (not rocking). Re-start was still within a second.

For the driver, the engine shutting off is largely unnoticed unless you're anticipating it. For passengers, it's hardly felt at all, even when waiting for it or trying to feel it happen. It's more obvious when the windows are down, but only slightly more so as the V6 is a very quiet engine when idling. The re-start of the engine is far more obvious and comes through even when one isn't anticipating it happening, but this doesn't impart discomfort.

Comparing the Cherokee to Others
Few in the Cherokee's segment feature Stop/Start as an option, but several vehicles outside of its segment do. The Subaru Crosstrek Hybrid, for example, has Stop/Start as standard, but in that vehicle, the engine cutting off and starting back up is disconcerting and tinny-sounding. So much so that several times while driving it, I was concerned that the engine had stalled out until I realized what had happened. Other vehicles, particularly V6 models in the Chevrolet lineup, feature very well-done Stop/Start systems as do most of the Toyota hybrid vehicles such as the Prius line and Camry Hybrid.

In comparison to other models with this technology as a whole, the 2015 Jeep Cherokee is a very good example of a well-done Stop/Start system. It's not quite perfect, but it's far better than many.