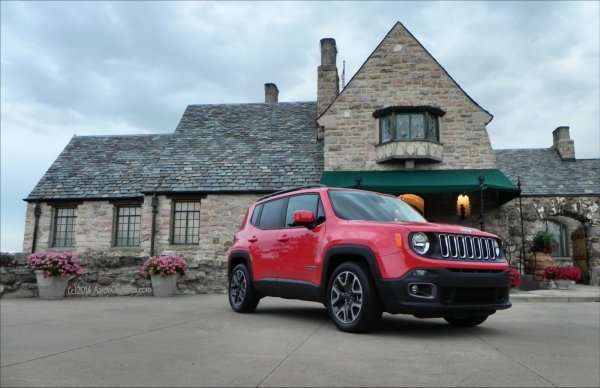 We Get Hands On With the 2015 Jeep Renegade

The 2015 Jeep Renegade is the Jeep brand's first truly global platform and is headed for 100 markets around the world as a new brand ambassador for Jeep enthusiasm.
Advertisement

Jeep invited us to check out the new 2015 Renegade as it makes its "Design Tour" around the country. The showcase, appropriately, was at the Cherokee Mansion near Denver, Colorado where we joined a small contingent of Rocky Mountain area press to lay eyes and hands on the new Renegade.

Our regional press representative, Wendy Orthman, was on hand to introduce us to the Head of the Jeep Brand North America, Jim Morrison and Head of Jeep Design, Mark Allen. The three of them introduced us to the exciting new Renegade which, interestingly, will become the first Jeep to be built exclusively overseas (Italy) and that will also become the first Jeep vehicle to have a wider audience outside of the United States than it will domestically. Although that might sound like it's not targeted for an American audience, just the opposite is true. The Renegade is aimed directly at American-style consumers globally.

A first look at the 2015 Jeep Renegade made it clear that this was not the "little Jeep" we might have expected. Physically, it draws heavily from two elements that only today's Fiat-Chrysler could have: Italian vehicle style and the Jeep Wrangler's heritage appeal. For the astute observer, the new Renegade has old Willys and Wrangler elements in abundance, but all fitted to a very 500-ish platform. In words, that sounds horrid, but on first-hand observation, it's clear that Jeep has found a winning mix. It grows on you quickly.

This is the first vehicle to use the global "small-wide 4x4 architecture" based on the Fiat 500L's long wheelbase chassis, but which incorporates proprietary Jeep offroad and AWD/4WD elements. In overall wheelbase and size, the Renegade is actually smaller than the 500L, but you'd never know that at first glance. This compact SUV is unique in almost every way, but doesn't sacrifice the Jeep heritage of offroad and all-weather capability to be that way.

The Wrangler "profile," as Mark Allen put it, is evident everywhere on this new Renegade. Vertical lines abound from the front grille to the windscreen and the hatchback rear end. The trapezoidal wheel arches mark it clearly as a Jeep as does the "grinning tooth" grille and rounded headlamps. Those are cut slightly by the hood, creating a sort of "lidded eyes" look that is unusual for the brand, but that adds an interestingly youthful element to the Renegade.

Allen also pointed out the lowered belt line, the "My Sky" removable roof panel system, and other class-exclusive design elements such as the X-marked rear tail lamps and interior "Wrangler Easter Eggs" that throw back to the world's most well-known offroad machine.

Inside, the 2015 Renegade is youthfully sporty and relatively large despite its small exterior size. The box-shape is now a popularized exterior look thanks to its interior practicality and is well-done here.

Jeep expects that the EPA fuel economy numbers for the Renegade will be in the 30+ range on the highway and that the MSRP for this new Jeep will begin under $20,000. Sales will begin in the U.S. on January 1.

Four trim levels and two engine options will be offered for the 2015 Renegade. The base trim will be the Renegade Sport followed by a Renegade Latitude (shown above), the Renegade Limited, and a Renegade Trailhawk for offroad emphasis. Each has all-wheel drive that actively goes front-wheel drive when not needed via a magnetic clutch system similar to that used in the Cherokee and other Chrysler models. The Trailhawk edition will add a locking differential, creep and descent controls, larger trail-ready tires, unique front and rear fascias, and more ground clearance.

Engine options for the 2015 Renegade will include the 2.4-liter Tigershark that appears in the Chrysler 200 and other models as well as a Jeep-first turbocharged 1.4-liter MultiAir Turbo. The Tigershark is mated to a segment-first nine-speed transmission while the MultiAir Turbo utilizes a six-speed manual transmission as standard.

A full suite of technology will also be offered in the 2015 Jeep Renegade, including Chrysler's Uconnect system and several safety and other offerings as standard or as options in various trim levels.

As for model strategy, Jeep tells us that the Renegade, being smaller than the Patriot/Compass, fits underneath those and the larger Cherokee as the new entry-level offering for the Jeep brand.

Finally, good news for enthusiasts of Jeep Performance.. Jim Morrison told us directly that yes, Performance will "get ahold" of the Renegade and very soon.