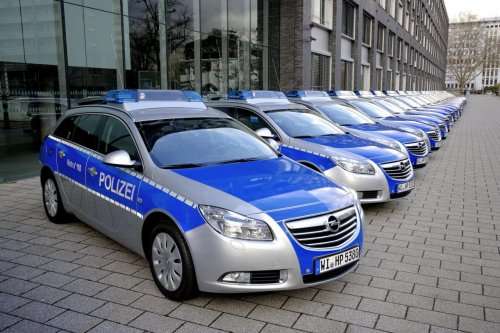 The German Polizei are learning the hard way that modern auto design is cramped and uncomfortable as new squad cars being delivered from Opel are too small for the men and their equipment.
Advertisement

The German state of Hessen put in a €25 million Euro order ($32.8M USD) for new police cars from General Motor's European brand Opel back in 2010 and began receiving specially marked and outfitted Opel Insignias that year. Officers of the Polizei immediately noticed something..

They don't fit in these new, smaller, sleeker cars. The officers, who carry a lot more equipment on their person than the average citizen out for a drive, are finding that they can't sit in the seats the vehicles are equipped with thanks to their batons, guns, handcuffs, pepper spray, cell phones.. and the host of other accoutrement that police the world over generally carry.

What's more, they have trouble seeing out the rear and sides of the Insignias thanks to the low roofline, small-ish windows, and small side view mirrors. That's a safety problem beyond just comfort issues.

The ministry, however, says that the orders are already in and the cops will just have to deal with it. The Hessen Polizei have received about 200 of the 800 total cars to be delivered over the life of the deal penned in 2010. The cars are replacing outdated and older Opel autos (mostly the Zafira) in the fleet. The ministry made the decision because Opel is headquartered in Hesse and builds the Insignia in-country, so the price was much lower than the competition. Now they're finding out why.

Or at least their officers are.

The GdP (police union) is accusing the Interior Ministry of not testing the vehicles properly before signing the order. Deputy Chairman of the GdP Lothar Hölzgen says "I need to see out of the back every minute, every second. That's a safety matter for us" (translated). His comments in German news outlet The Local were quite scathing regarding the ministry's handling of the Opel Polizei orders.

The Insignia Sport Tourer wagon that the German cops ordered are the same as the Buick Regal Wagon we almost had here in the states. Having sat in one of them, I can say that for a civilian of large caliber (6 feet, 3 inches, 250 pounds), I found the interior roomy enough, but the seats were small - similar to the seats in most Japanese imported compacts, in fact. Buick and GM aren't the only culprits in this downsizing charade, though. Most cars that are not large luxury sedans, trucks or SUVs that I have tested are generally this way with the exception of only a handful of automakers. This seat downsizing is part of a design plan most companies are gravitating towards that increases interior room by shrinking the bucket seats.

It's a modern design trend that I and the German police would like to see tossed out.