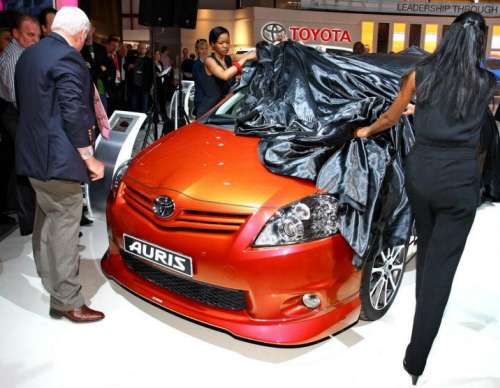 The new Toyota Auris, shown here being unveiled by Mufti Maqbool Khatieb and Kent Pluke of Toyota at the Johannesburg Expo Centre in Nasrec, is a limited-production hatchback coupe powered by a 1.6-liter petrol engine. The powerplant generates 133kW at 6400 rpm and 202Nm at 5200 rpm

The Auris TRD will be accompanied by a bolt-on supercharging kit and aero body kit with skirting. A TRD Sportivo suspension kit is included in the package.

Toyota has not priced the Auris TRD. The auto press in South Africa speculate the car will sell there for "below the R300 000 mark."

Local reporters speculated in their columns that competitors of the Toyota Auris TRD include the Golf GTI and Opel Astra 1.6T. Potential buyers are excited by the car.

Other show highlights from Johannesburg:

1. Nissan announced plans to launch its Leaf lithium ion battery-driven car in South Africa by 2013. The Leaf, which is on display this weekend in Johannesburg, is sold right now in North America, Japan and Europe. The Leaf has been in production since 2010. The Leaf is assembled in Oppama, Japan, at present but will be built in Smyrna, Tenn., in 2012 and in the United Kingdom in 2013, a Nissan spokesman told reporters.

2. Tata Motors, India's largest automaker, introduced the Manza sedan and Prima "world trucks" on Friday, generating auto-industry buzz worldwide. A "formal" launch of these vehicles is planned for the first quarter of 2012 and after that they will be available for purchase.

"These introductions benefit from our innovations and learnings from South Africa's customers," Tata Motors Managing Director of India Operations PM Telang said in a statement.

Tata Motors has sold more than 32,000 vehicles in South Africa since it began exporting vehicles in 2004.

"We see Africa as a region of tremendous potential," Noel Tata, managing director of Tata International Ltd., told reporters in Johannesburg. "In South Africa, the auto industry is making giant strides and we are happy to contribute to this growth."

3. The Audi e-tron electric car concept has generated a lot of excitement among show-goers.