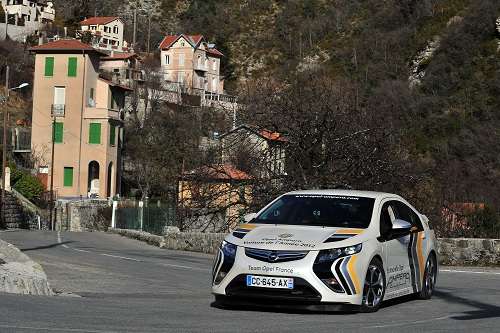 The Chevy Volt's European cousin, the Opel Ampera, won the 13th International Monte Carlo Rally in the electric cars and alternative propulsion category over the weekend. This is the first-time the Opel Ampera has competed in the Monte Carlo and won.
Advertisement

Driving the winning Opel Ampera in the Monte Carlo Rally was the French team Bernard Darniche and Joseph Lambert. The French team should feel proud as they beat 130 competitors from 30 different automakers from around the world.

“The sophisticated technology of the Ampera was always reliable and enabled our tremendous success,” said Joseph Lambert who won the Rally. Lamberts's co-driver, Bernard Darniche, is no stranger to the Rally and winning. The extremely successful former professional rally driver won the legendary event back in 1979 and has more than 10 times been successful in winning the special stage over the famous Col de Turini. This stage is referred to as the "Night of the Long Knives" since the Alpine pass is usually driven in darkness. That's got to be exciting, but scary!

Out of seven Opel Amperas that entered the race a total of 4 finished in the Top 10. Driving the other Amperas that placed in the top 10 were Charlotte Berton and Olivier Sussot who came in third place, Jean-Claude Andruet and Patrick Lienne who came in 7th place and Hanns Werner Wirth and Daniel Riesen finished 8th..

Other alternative cars and electric vehicles were competitors in race were a Mitsubishi I-MiEV, Peugeot Ion, and Renault Fluence Z.E. Most surprising a Tesla Roadster sports car was in the race, which probably was faster than the Opel Ampera, but most likely didn't have the necessary range for the Monte Carlo Rally.

“The Ampera’s success in this versatility contest under very challenging conditions proves its impressive balance between durability and fuel efficiency.” says Opel’s Director of E-mobility, Enno Fuchs. This is because the Ampera is fitted with a gas engine as well as an electric motor. You can travel around 40 miles on a charge (probably much less when racing in a Rally though) and then a gas engine kicks in when you run out of battery charge. Making the Ampera an ideal candidate for racing in an event like this.

The Monte Carlo Rally, for alternative and electric vehicles, started in 1995 and is organized by the Monte Carlo Automobile Club. This is the oldest motoring event for vehicles with means of propulsion that isn't gas. This leaves the field of contenders open to innovative contenders like the Tesla Roadster, Toyota Prius, and of course Opel Ampera.

The Monte Carlo Rally is a real endurance test for any car, let alone ones that are electric, hybrids, or whatever. It starts in the French towns of Annecy-le-Vieux, Clermont Ferrand and Lugano. Teams must drive over 342 miles to Monaco on the first day. On the second day teams drive 169 miles from Monaco through the French Maritime Alps, which is a grueling series of very twisty turns and the original route of the Monte Carlo Rally. For experienced drivers this stage is quite a blast, but still difficult to manage. Driving on this stage is not quite like driving easily on highway.

Watch the video below to get a feel for the 13th International Monte Carlo Rally and see Bernard Darniche and Joseph Lambert take first place in their Opel Ampera.

Toyota's First EV Will Have a Name of BZ: Toyota BZ
First Videos From Inside The Boring Company's Las Vegas Loop
END_OF_DOCUMENT_TOKEN_TO_BE_REPLACED