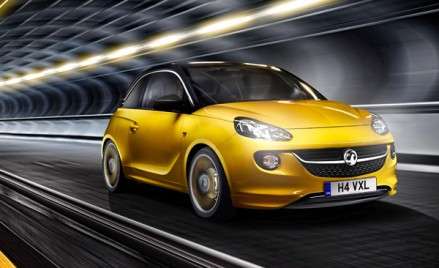 GM's Opel to take on Mini and Fiat 500 with Adam

General Motors will be unveiling its Opel Adam at the Paris Auto Show in September, a direct 3-door competitor to the BMW Mini and Fiat 500 in Europe.
Advertisement

General Motors is planning to aggressively take on the BMW Mini and Fiat 500 directly on their home territory in Europe. The new Adam is a 3-door mini compact that will unveil at September's Paris Auto Show to be sold under the Opel and Vauxhall brands.

The car will compete by appealing directly to the top market for the Mini and 500, young people, by offering over a million trim combinations, which GM's European design lead Mark Adams says no other car in the segment can match for individualization. He says "we are offering virtually unlimited exterior/interior color, fabric and kit combination choices."

The roof of the Adam is floating, similar to the Audi A1, allowing 2-tone paint options to have more impact. Several other GM design cues from its European lines include the swooshed line hooking the door handles, the wing-shaped chrome grille bar, the blade-cut at the lower doors, and the rounded, elongated headlamps. It will be the first car in this class to offer LED daytime running lights as well.

Three basic trim levels will be available at launch, including the JAM, GLAM, and SLAM for a fashionable, elegant, or sporty start to the customization of the car. Two different roof colors and a myriad of body colors are available as well as several options for interior materials, colors and equipment including a LED-lit starlight roof trim (ala Bentley).

Power plants will be one of three ecoFLEX 4-cylinder gasoline engines. An economical 1.2-liter, 69 bhp base option to start or either of two 1.4-liter engines in 86 bhp or 99 bhp. Start-stop technology is optional for all three engines and all will come mated to a 5-speed manual gearbox. Down the line, GM plans to offer its not-yet-released smaller, new-generation gasoline engine with direct injection and forced induction as well as a new 6-speed gearbox.

The tiny Adam measures 145 inches long and 68 inches wide with a front and rear track of 58.4 and 58.1 inches, respectively, on a wheelbase of 91 inches - a big footprint for such a small beast. Wheels are stock at 16 inches and can be upgraded to 17 or 18 inch options (17 is standard on the SLAM kit). Enhanced handling adds enhancement to the electronic power steering assist when at low speeds to help with urban maneuvering.

The infotainment system inside the Adam starts with basic media connectivity such as Bluetooth, smartphone plug (with Android or iOS options) with an optional upgrade bringing Internet access, GPS navigation, etc. A 7-inch full color touch screen display is built-in with the system.

To appeal to the European driver, round, retro-style instruments with chrome bezels set off the driver's cockpit. GM says the Adam will break new ground by offering several luxury options never before offered in the A-class, including a heated steering wheel and the Advanced Park Assist II system.

Overall, the Opel and Vauxhall Adam is breaking new ground for GM.