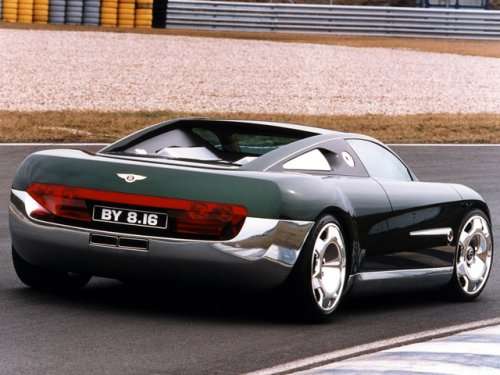 Industry buzz is that Bentley plans to show its first sports car in over a decade at the 2012 Paris Auto Salon.
Advertisement

Bentley Motors is the premier British nameplate for luxury cars. When most people hear the name "Bentley," they immediately think of large estate cars made for the ultra-rich and chauffeured by men named "Jeeves." Occasionally, however, the folks in Crewe like to throw a curve ball and introduce a sports car to wow us.

Such may be the case now, as a rumor started at Car & Driver says that the British automaker plans to unveil a new sports car concept at the upcoming Paris Auto Salon.

If that is the case, it would be the first sports car since 1999 when Bentley introduced the 16-cylinder, Lamborghini-based wowzer, the Hunaudieres concept (pictured). This car was as sleek as it was posh and had so many horses under the hood that its reigns were made of stainless steel.

Bentley's history has only rarely included production models of sports cars - and most of those were in the company's heyday of racing back in the 1920s. In more recent history, however, the designs of concept sports cars have had impact on Bentley's more sedate estate cars, creating sportier impressions like the new-design Continental GT grand touring coupe. If that car's 560 metric horsepower isn't enough for you, imagine the same W12 in a smaller, more sports-oriented machine. Wear a G-suit..

The sports car Bentley may be showing in Paris will more likely be a one-off concept to wow audiences and give those of us in the automotive press something to wax eloquent about. The reality is that Bentley is owned by Volkswagen, who also owns Porsche, Audi, Bugatti, and Lamborghini. If the car did go to production, it wouldn't be the first time VW competed against itself, of course, but it would not be wise given the rocky road Bugatti and Lamborghini have had in the past few years.

Whatever happens, if C&D is correct, an unveil from the designers at Crowe will be something to see. Anytime Bentley has something to show off, the world generally stops to see it because that venerable British company has never disappointed. This should be fun.

Tesla Contemplates A New Strategy for China Retail even As Sales Boom
Jay Leno on Elon Musk & EVs: “I Think He Should Get ... Credit"
END_OF_DOCUMENT_TOKEN_TO_BE_REPLACED