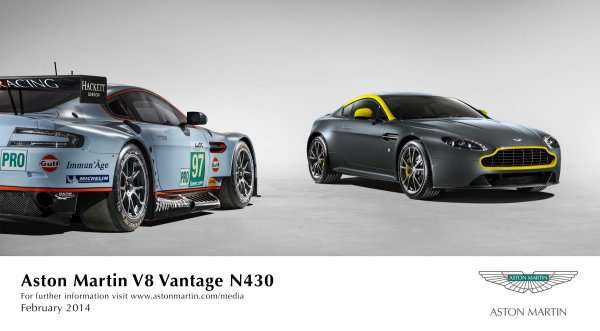 Two special editions of the Aston Martin DB9 will debut at the Geneva Motor Show alongside an exclusive new V8 Vantage N430 racer. Get the details here.
Advertisement

After a year of partying to celebrate it's 100th birthday, Aston Martin is back to business, this time with three special edition debuts for Geneva. Two of those are mirror images as special contrasts for the DB9 while the other is a special racing edition of the V8 Vantage.

The British sports car marque has created two new DB9 offerings, called the DB9 Carbon Black and DB9 Carbon White. These are, almost literally, carbon copies of one another, one blacked out, the other in shining white. These are versions of the timeless GT car emphasizing visual drama.

The Carbon Black accentuates the power of the 6.0-liter V12 through its dark theme that emphasizes the carbon fiber features subtly in a sinister, deeply shadowed visual.

Each of the special editions, of course, still houses the AM11 V12 engine with its 620Nm of torque and 517 PS peak power.

Meanwhile, the new Aston Martin V8 Vantage N430 continues the race breeding of the N-series, the new N430 will be available in both Coupe and Roadster forms. Ian Minards, Director of Product Development at Aston Martin, said of the new car: “N430 is all about bringing track-honed excitement to the road in an accessible, emotionally engaging, and authentically ‘analogue’ way."

The car features carbon fiber and Kevlar seats, ten-spoke, forged alloy wheels in graphite finish, all of which add up to a 20kg weight savings. This gives the V8 Vantage N430 a top speed of 190 mph and a 0-60 of just 4.6 seconds.

Fianlly, the V8 Vantage is given a darker theme on the exterior to denote the N430 packaging, including blacked grille, headlamp bezels, rear light bezels, meshes, and side window surrounds. These are offset by the optional sport livery graphics packs (yellow shown above).

Beautiful cars that those attending the Geneva International Motor Show next month can appreciate.