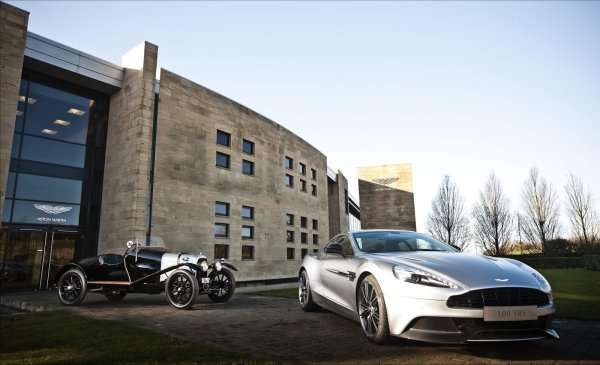 Aston Martin turned 100 years old on January 15th and has spent the last year celebrating. Those celebrations have been encapsulated in a stunning three minute video.
Advertisement

Starting on January 15, 2013, Aston Martin began centenary celebrations world wide. Showcasing models both new and old at events around the globe, the British coach builder and its fans celebrated a rich history of sports car building, racing, and show-stopping.

The first event which kicked off the year-long celebration was in London's Hennikew Mews just outside the premises where Lionel Martin and Robert Bamfort founded the company. From there, global events launched with fans gathering in Dubai to witness a new Vanquish be airlifted onto the helipad of the Burj Al Arab hotel.

Soon after, Aston introduced the beautiful new Rapide S to stunned audiences. This latest entry in the Aston Martin stable of offerings, replacing the previous Rapide with a powerful sedan featuring 17 percent more power and a bold new look.

Then Britain's most popular race course saw an exclusive 100 year celebration for Aston Martin fans when they converged on Silverstone with some of the most beautiful and iconic, privately-owned collections of British steel to ever return to the track.

Then Switzerland not long after, where the Aston Martin brand showcased beautiful Centenary Edition sports cars at the Geneva International Motor Show. Only one hundred of each special model would be made and sold, including a Vantage, DB9, Rapide S, and Vanquish. Each with exclusive detailing unique to the 100 year anniversary edition they are.

At the Nurburgring 24 Hours in Germany, a place where many of Aston Martin's historical feats of track prowess have occurred, a new concept to a crowd of more than 200,000 live spectators plus countless millions on global media. The CC100 Speedster Concept dropped jaws and continues to be one of the most talked about concepts of 2013. Just before the race began, more than 100 Aston Martins of past and present took to the Nurburgring in a celebratory parade lap led by the new concept. This parade included the beautiful DB5 featured in the latest James Bond film Skyfall among other very historically important Martins.

More records were set as the one-of-a-kind Bertone Jet DB4GT entered the Bronhams auction hosted by Aston Martin and fetched the highest price ever paid for an Aston, over three million British pounds. The company went on to host special events, parades, and winning runs at some of the world's most prestigious and important races, including Le Mans, GP, the Silverstone Classic, Goodwood and more.

In July, halfway through its celebration, a pinnacle was reached where Aston Martin showcased an event at the Kensington Palace Gardens in London with more than a billion British pounds worth of vehicles going on display in the heart of the British Empire. This event featured the showing of exceedingly rare Aston Martin vehicles from all points in the company's history, many brought out of exclusive private collections for the first time in decades. At the center of the display was a fitting tribute to Britain's most honored fictional hero, James Bond, in a love affair of seven movie cars.

Aston Martin continued its celebrations throughout Europe and then on to America and Pebble Beach, where the CC100, V12 Vantage S and Vanquish Volante all made their North American debuts.

From there, another stop in Britain and then on to Europe's fall motor show at Frankfurt, where once again, all eyes were on Aston Martin as they showcased their lineup of bespoke automobiles.

To record the events for posterity, including the exclusive art works created by James Hart Dyke on behalf of Aston Martin, an Aston Martin Yearbook was created along with the following video celebration. The Yearbook can be found at astonmartinyearbook.com.