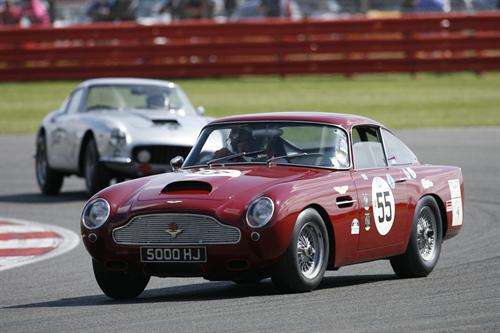 100 years of Aston Martin at Silverstone

The 2013 Silverstone Classic promises to be an epic event and the lunchtime parade around the track will feature Aston Martin celebrating its 100th anniversary by parading 100 classic and current collector cars around the circuit.
Advertisement

One of Britain's largest automotive celebrations is the Silverstone Classic held every summer at the Silverstone racing circuit. This year, the Featured Celebration Marque for 2013 will be British automaker Astin Martin as they celebrate their centenary.

Over the Silverstone weekend, Aston Martin vehicles will be showcased with the highlight being a 100-car parade of past and present Aston Martins on July 27th at lunch time. This breathtaking collection will include race cars, collectibles, roadsters, and more from the British maker's long history of coach building.

This brings Aston Martin home. Back in 1913, the company's founders Lionel Martin and Robert Bamford entered their first race car, a modified Singer, into a speed event at Aston Clinton (pre-Silverstone). They won. In celebration of that win, which put them into the limelight enough to start designing their own race cars, the first Aston Martin was built with the name celebrating the winning race and its driver. The new British automaker was born.

Since that time, Aston Martin has placed and won at Silverstone multiple times. From the track's new coronation in the 1950s through to current wins, they've been closely linked with Silverstone. Recent wins include the FIA GT wins in the RAC Tourist Trophy runs in both 2005 and 2008.

The Silverstone Classic is the world's largest motor racing festival and its signature event, the Royal Automobile Club Historic Tourist Trophy for pre-1963 GT cars has been dominated by Aston Martin the past two years, with a Stuart Graham and Richard Attwood win in 2011 and a Nick Naismith and John Young win in 2012. In both cases, the racers were in DB4 GTs (pictured above).

The three-day Silverstone Classic event starts July 26th and tickets are traditionally all-access, with one ticket buying access to every event of the weekend from car shows to races to music concerts. The event takes place around the historic and revered Silverstone racing circuit in Northamtonshire.