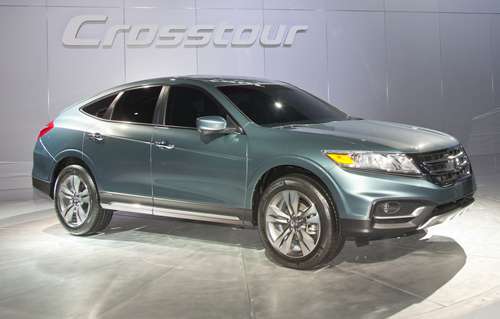 Honda Crosstour a Concept in Name Only

The biggest improvement that Honda made was streamlining its name. It will no longer be known as the Honda Accord Crosstour, which is a good thing. The Crosstour had nothing to do with the Accord sedan in the minds of most buyers. Latching onto the name seemed to alienate (somewhat irrationally) the automotive press corps when it was first introduced.

The Honda Crosstour also didn't get widespread interest from the automotive media at the New York Auto Show. However, it is one of the seven most important vehicles introduced at the show.

The beauty of the Crosstour has been its individuality. There is no doubt what you are seeing when one passes by. It has made a move to looking more like a Nissan Murano with its front end but that could make it more appealing to the mainstream buyer.

The Crosstour will offer two powertrains for the 2013 model year: a re-engineered and more powerful 3.5-liter, 24-valve, SOHC, i-VTEC V-6 engine, or a 2.4-liter i-VTEC inline four-cylinder engine. The 2013 Crosstour V-6 models will feature a 6-speed automatic transmission and utilize Honda Variable Cylinder Management (VCM) technology to achieve what is projected to be class-leading V-6 fuel economy along with an overall improvement in fuel economy compared to the outgoing model. Also available on Crosstour EX-L V-6 models is Honda's Real Time 4WDTM system, which sends power to all four wheels when front-wheel slippage is detected.

The four-cylinder Crosstour models are powered by a 2.4-liter, 16-valve DOHC i-VTEC engine producing 192 horsepower at 7,000 rpm and 162 lb-ft of torque at 4,400 rpm. To maximize efficiency, a five-speed automatic transmission with Grade Logic Control is standard equipment.

The 2013 Crosstour will introduce numerous new safety features, and is targeted to earn top scores in the federal government's New Car Assessment Program (NCAP). The next Crosstour will be available with Honda's Lane Departure Warning (LDW) and Forward Collision Warning (FCW) technology. Both systems use a camera mounted behind the windshield to alert drivers if the car is moving unexpectedly out of its lane or to warn drivers of a potential collision in front of them.

The 2013 Crosstour will provide a host of visibility enhancements, and will be one of the first models to receive the Honda-exclusive LaneWatch blind-spot display, which uses a camera system mounted on the passenger mirror for an enhanced view of the passenger-side roadway. Standard equipment to further enhance visibility on the 2013 Crosstour will also include re-shaped rear headrests, a rearview camera and an ExpandedView Driver's Mirror.

It will be interesting to see if the design changes as well as the interior improvements are enough to get the Crosstour more recognition. Giving it its own identity separate from the Accord may be the most important step.