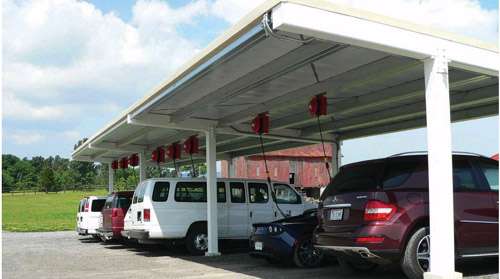 The government is demonstrating its willingness to get behind green sources of energy by adding the first solar-powered charging station to the Government Services Administration schedule. That allows it to be purchased by federal agencies for use.
Advertisement

Unlike other charging devices that use traditional public utility-generated electricity, Merit’s solar-powered charging station powers vehicles using electricity generated through solar power. The beauty of the system, which resembles a carport, is it can be set up anywhere, including national parks, and is not tied into traditional power sources.

“The Solar Charging Station takes President Obama’s Executive Order to reduce vehicle emissions one step further by using the sun – and not utility-generated electricity – to power the government’s fleet,” said Malia Kaiser, president of Merit Builders, a nationally recognized, independent erector that has served the metal building industry since 1987.

The solar powered charging station's connectors conform to all national auto manufacturers’ specifications and can be used to power the new generation of electric vehicles currently being released by Nissan, Ford, Chevrolet, and other emerging EV auto makers such as Tesla.

The Solar Charging Station is designed to the specifications of a traditional 9’ x 20’ parking space but can be constructed to accommodate any site or fleet requirement. The Station’s grid-tied system meets all applicable construction codes throughout the U.S. and its design requires minimal maintenance. The materials used to construct the carport have a lifetime structural certification and are completely recyclable. The solar modules have a 25-year warranty.

solar power wrote on May 6, 2011 - 5:24am Permalink
I know solar is very important in future.It has many benefits.As of now, solar power and solar related devices are expensive. But it may be reduced if most of the people start using it