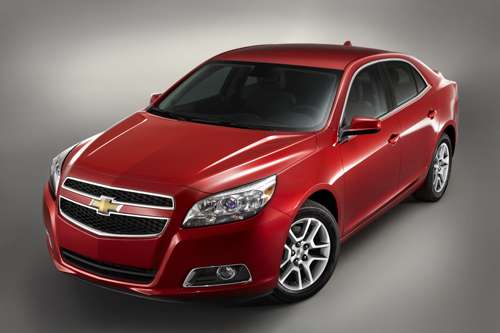 Chevrolet has released complete details and price for the 2013 Malibu Eco but one industry analyst is already calling into question if the new offering is really worth the additional tariff required for fuel efficiency.
Advertisement

The 2013 Chevrolet Malibu Eco is going to have a price tag of $25,995 when it arrives at dealers in the first quarter of 2012. The MSRP includes a $760 destination charge but excludes tax, title, license and dealer fees.

The 2013 Malibu Eco is Chevrolet’s most fuel-efficient Malibu ever. It is the first Chevrolet to feature General Motors’ eAssist battery electric/gas propulsion system, which uses a lithium-ion battery and an electric motor-generator to enable regenerative braking, electric assist and start-stop functionality. That helps deliver a GM-estimated 26 mpg in city driving and 38 mpg on the highway. The system is already being used by Buick on its LaCrosse.

While Chevy compares itself to other hybrids in price, it doesn't compare its pricing to the 2013 Malibu, which is an important factor in how future owners determine if the savings are there in addition to the fuel efficiency. No prices have been released for the standard model but it should be about $2000 less expensive than the Eco trim level.

Says Edmunds.com Analyst Ivan Dury, “General Motors is touting the Chevy Malibu Eco in the same breath as midsize hybrids, but the Eco’s combined fuel economy is simply not in the same class. It takes years worth of gas station fill-ups to recover the price premium of a hybrid, and this Eco trim level carries the same type of premium but less efficiency than a hybrid.”

As the annual fuel cost numbers show, the Malibu Eco is actually the most expensive of the five models to operate – even more expensive than the Passat TDI that uses higher-price diesel fuel.

Fuel Saving Details:
• Eco-specific lightweight components and systems, including an aluminum hood, aluminum rear bumper beam, low-mass carpet and dash mat and more, which save approximately 130 pounds (58 kg) over a comparably equipped non-ECO model
• An Eco gauge in the cluster that continuously responds to driving behavior, encouraging fuel-efficient driving. An Auto Stop Indicator on the tachometer informs the driver when the engine is in start-stop mode
• Seventeen-inch low-rolling-resistance all-season Goodyear tires
• The eAssist system mated to a fuel-efficient 2.4L Ecotec direct-injection four-cylinder engine and next-generation six-speed automatic transmission. The 2.4L engine, a variant of the same engine that was recognized as one of Ward's Ten Best Engines in 2010, is lightweight and features dual-overhead cams, direct injection, continuously variable intake and exhaust timing and electronic throttle control. It also has a lightweight aluminum cylinder block and cylinder head.