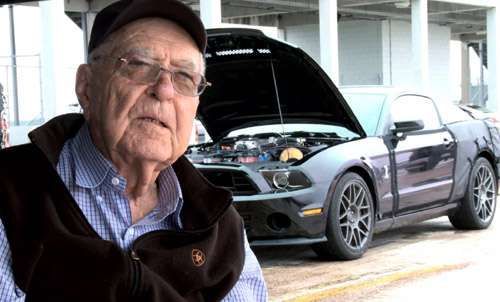 The Car Behind the 2013 Shelby GT Sells for Big Bucks

The car that proved the 2013 Shelby GT 500 production Mustang could be a reality was sold at the 41st Annual Barrett-Jackson Collector Car Auction late Saturday night in Scottsdale, Ariz., for $350,000 with all proceeds benefiting charity.
Advertisement

The car sold was the racetrack durability car used to develop the 2013 Shelby GT500 production Mustang. “This GT500 durability car represents the most recent collaboration between Ford SVT and Carroll Shelby,” said Ford’s President of The Americas Mark Fields in a statement made available to Torque News. “Working alongside Carroll, our SVT team put this durability car through some of the most demanding driving conditions at Sebring International Raceway as well as others across the country. The result of those tests is the 2013 Ford Shelby GT500, the most powerful production V8 in the world.”

The durability car was built in 2007 – one of the first vehicles with the new 2010 body. Then, for the 2013 model, the prototype was run for 24 hours at top speeds of 150 mph at Sebring to ensure all systems function properly for customers who will replicate such grueling conditions.

The car includes a full roll cage, six-point harness seatbelts and new Recaro racing seats that were donated by Recaro North America, identical to those used in development. The production 2013 Shelby GT500 will be available with optional SVT-designed Recaro seats. Evidence of instrumentation from development also can be found inside the vehicle. Each member of SVT engineering who worked on the 2013 Shelby GT500 has signed the underside of the trunk lid.

“I raced on the Sebring International racetrack for many years, but my ambition was always to build my own car,” said Carroll Shelby. “It was exciting to be back to collaborate on this GT500 durability car with the SVT guys. I’m really proud to have my name on this car. They took my dreams of what a car should be and made it a reality.”

All proceeds from the auction of the car will benefit JDRF, a leader in research leading to a cure for type 1 diabetes. During the past five years, Ford has raised more than $3 million for charity through sales of vehicles at Barrett-Jackson auctions.

“Ford is proud of its ongoing partnership with JDRF in the fight to find a cure for type 1 diabetes,” said Edsel B. Ford II. “The energy and excitement at Barrett-Jackson creates the perfect environment for Ford to raise significant funds that will help bring us closer to a world free from diabetes.”

The ultimate Ford Mustang – Shelby GT500 – raises the bar high on performance by delivering a test track top speed of more than 200 mph. The 5.8-liter V8 aluminum-block engine produces 650 horsepower and 600 lb.-ft. of torque, making it the most powerful production V8 in the world. The 2013 Ford Shelby GT500 will be built at AutoAlliance International Plant in Flat Rock, Mich.

Elon Makes a Cybertruck Statement With an Action, But Quiet in Words
Tesla's Record Month in China: Doubled Registrations in March 2021
END_OF_DOCUMENT_TOKEN_TO_BE_REPLACED