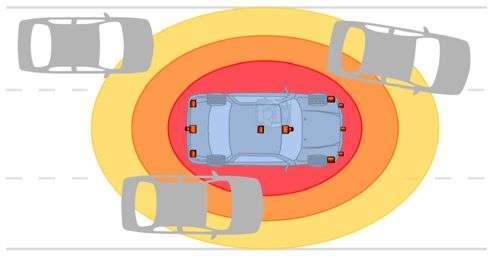 The Cadillac XTS that debuts this fall as a 2013 model is using some little known technology to improve the vehicle’s safety and make it a leader in technology for other models in the Cadillac family.
Advertisement

The available Driver Assistance Package for the XTS is the first General Motors system of its kind to use sensor fusion, which enables integration of a broad range of sensing and positioning technologies that can alert drivers of road hazards and help them avoid crashes.

“We believe sensor fusion will enable future active safety systems to handle a greater number of inputs to provide 360 degrees of crash risk detection and enhanced driver assist features,” said Bakhtiar Litkouhi, GM Research and Development lab group manager for perception and vehicle control systems., in a statement made available to Torque News. “A system that combines the strengths of multiple sensing technologies and expertly manages those inputs can provide advisory, warning, and control interventions to help drivers avoid collisions and save lives.”

Sensor fusion also is a building block in the development of semi-autonomous and fully autonomous vehicles, which are designed to maintain lane position and adapt to traffic environments. It is envisioned that more sophisticated self-driving technology, that could enable semi and fully autonomous driving, will be available by the end of the decade.

Sensor fusion development also is bolstered by GM’s work on the EN-V, three semi-autonomous electric concept vehicles unveiled at the 2010 Shanghai World Expo. By combining GPS with vehicle-to-vehicle communications, distance-sensing and object detection technologies, EN-V can be driven both manually and autonomously, the latter allowing it to automatically select the fastest route based on real-time traffic information.

Among the technologies that GM is looking to develop for future active safety systems is LIDAR, a light detecting and ranging technology that can measure the distance to a vehicle or object by illuminating it, often using pulses from a laser. Although LIDAR is no replacement for driver vision, it can become another set of eyes when visibility has deteriorated due to inclement weather or darkness. When combined with radar, cameras and ultrasonic sensors, LIDAR has potential crash avoidance capability.

A more advanced positioning system, using more accurate GPS and digital mapping, also is expected to play an important role on future active safety systems because it helps locate vehicles in relation to one another. While GPS effectiveness can be limited in urban canyon environments where high-rise buildings can interfere with satellite signals, the technology is still considered an asset when “fused” with other sensing and positioning technologies.

“No sensor working alone provides all the needed information. That’s why multiple sensors and positioning technologies need to work together synergistically and seamlessly,” Litkouhi said. “Sensor fusion will help facilitate that.”

The safety advances in the Cadillac XTS are a sure footprint for what is coming in the future for all GM products and not just in the luxury division.