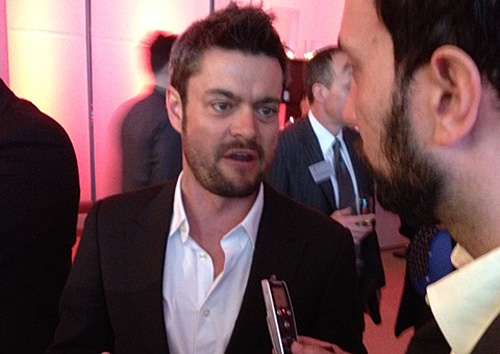 Before the grand opening of the New York International Auto Show, Lincoln debuted the 2013 Lincoln MKZ before a packed house at the beautiful IAC building in Manhattan's lower West Side. It's the first Lincoln product to come out under Lincoln's relatively new director of design Max Wolff and it demonstrates what a difficult job he has ahead of him.
Advertisement

The 2013 Lincoln MKZ reveal, appropriately enough, was inside the stunning edifice designed by noted architect Frank Gehry. It was an event design to denote Lincoln's emphasis on luxury with a six-piece musical ensemble, a sand artist, open bar, outstanding cuisine and a tower of cupcakes. And, let's not forget, Max Wolff.

He stood in front of the assembled mass and waxed enthusiastic about the midsize sedan's inviting appearance that Wolff said invoked "modern simplicity." He seemed most proud of the front fascia's split-wing grille, which he poetically described as "inspired by eagle's wings."

Later in an interview to the side of the MKZ stage, Wolff said the front fascia was his signature element in the car's design. He only came onboard in January 2011 after a stint as Cadillac's exterior design director. When he first joined Lincoln, he said the design team was unhappy with the MKZ's front end. "One of the defining moments was going from vertical to horizontal," he said. "It adds visual width."

Wolff plays an important part in the revival of the Lincoln brand. It has been hit with plummeting sales as Ford products go upscale, almost negating the need to purchase a Lincoln. As one journalist put it at the event, "Why purchase a Lincoln when you can buy a Ford that looks like an Aston Martin?"

During an interview Wolff gave me for the Boston Globe when he was still director of design for Cadillac exteriors, he said it was important for exterior and interior design teams to work together. As he put it then, "The exterior of a car is the rolling billboard for the brand. Not so many folks see the interior. They experience it at the dealership. It is the interior that seals the deal. You can’t compromise the exterior of the car for the interior too much."

Wolff said he made a conscious effort to bring the interior and exterior design teams at Lincoln together to work in the same space. One of Wolff's first steps was the construction of the all-new Lincoln Design Studio in Dearborn, Mich. Under his direction, construction of the 40,000-square-foot studio began in early 2011 and ultimately will house more than 180 modelers, engineers, stylists and designers in a space that encourages creativity and collaboration.

He said when interior and exterior design teams work apart it is "sometimes hard to keep the momentum going." Having them work in the same space encourages the sharing of ideas. "We can come up with a simple vision," Wolff said.

During his onstage comments, Wolff described the use of LED lighting for all the exterior lighting. He also commented on the leather seating surfaces as well as the integrated exhaust tips as being among the design standouts.

Before Wolff took his place upon the futuristic white stage, complete with automotive-size turntable, Mark Fields, Ford president of the Americas, stood in front of an enthusiastic crowd and declared the company's commitment to Lincoln with a promise to make it a "world class luxury brand." In the next three years, there will be seven all-new or greatly refurbished models offered in the Lincoln line, Fields added.

In addition to making great products, Jim Farley, Ford's global marketing director, also said Lincoln's commitment going forward will be to providing the best customer service in the industry with a combination of the latest technology and old-fashion one-on-one contact with training from the premiere concierge association in the world.

No precise details were given on the 2013 Lincoln MKZ's powertrain. Farley did mention there will be a hybrid version as an option. More complete details are expected at the official media unveiling of the sedan on April 4 at the press preview for the New York International Auto Show.