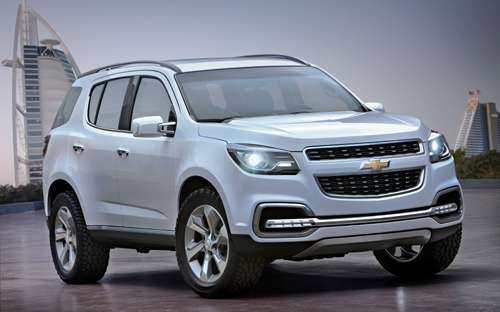 Chevrolet is saying the next-generation 2013 TrailBlazer being shown in Dubai is a show vehicle but the overall design is faithful to the production version that will arrive in Chevrolet showrooms next year. The TrailBlazer first goes on sale in Thailand in early 2012.

The big shame is the TrailBlazer is not currently sold in the United States and has not been since 2009. It was replaced in the Chevrolet lineup by the slightly better Chevrolet Equinox. (Well, the second generation Equinox is actually a lot better.)

However, it could be likely that the TrailBlazer, which is an iconic name for Chevrolet, could see its return to the U.S. market because it is based on the Chevrolet Colorado that is being sold here. Plus, it's a body-on-frame SUV, which has largely disappeared from the U.S. market in favor of the more carlike crossover utility vehicles (the aforementioned Equinox).

"It is a reflection of the importance of the Middle East market for General Motors that a vehicle as important as TrailBlazer is making its global debut at this show,” said GM Middle East Operations President and Managing Director John Stadwick. “Without question, the new TrailBlazer will be one of the biggest and toughest members of the Chevrolet family – the perfect vehicle to take on the Middle East’s competitive midsize SUV segment."

The midsize SUV segment is competitive around the world and Chevrolet might be on the right track with the TrailBlazer that it says combines the hauling and towing capability of a body-on-frame SUV with the ride comfort and efficiency of a crossover. It seats seven.

Developed in tandem with the all-new Chevrolet Colorado pickup by GM do Brasil, it shares the same architecture as its truck sibling, with a chassis tuned to combine heavy-duty off-road capability with refined city driving.

The show vehicle features an all-wheel-drive system and is powered by GM’s new 2.8-liter Duramax turbo-diesel engine, which features a variable-geometry turbocharger for an optimal combination of performance and fuel economy. No horsepower information was released for this powertrain.

The 2013 TrailBlazer was created by the GM South America Design Center in São Caetano do Sul, Brazil, and shares a number of design cues with its sister vehicle, the Chevrolet Colorado. Exterior highlights include a “body in-wheels out” design that delivers high approach and departure angles. A power dome in the hood combined with a raised cowl gives the TrailBlazer a strong, purposeful appearance. Higher-mounted dual projector headlamps are positioned beneath the power dome.

“TrailBlazer delivers a great combination of capabilities, from negotiating off-road trails to daily city driving, that we wanted to convey visually,” said Matt Noone, director of design for GM do Brasil. “There’s an obvious sense of muscle in the design, but at the same time a very sophisticated appearance in line with the world’s premium SUVs. From every angle, TrailBlazer looks agile and athletic, with a refined finish that makes it a vehicle our customers will aspire to own.”

More information about price for the 2013 Chevrolet Trailblazer will be available as it nears its debut in Thailand. Other powertrain options will probably also be unveiled then, too.