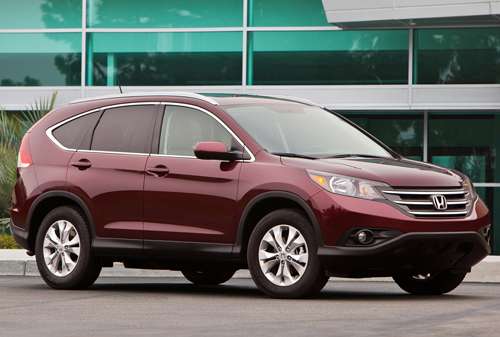 Here's news bound to upset owners of the 2011 Honda CR-V: the 2012 Honda CR-V, which went on sale today, debuts with a price of $22,295. That is the same as the outgoing model while adding content and having better fuel economy numbers.
Advertisement

In other words, 2011 Honda CR-V owners are finding themselves paying the same amount of money for a compact crossover utility vehicle that has less content. The 2012 Honda CR-V will range in price up $28,295 for the EX-L AWD, plus a destination and handling charge of $810 per vehicle.

The Honda CR-V adds between $400 and $1000 worth of standard features and technologies to each trim compared to the 2011 model it replaces. Even loaded with feature content, the line saw only a modest average price increase of $181 and on models equipped with navigation, the price decreases by $300 compared to 2011, according to Honda.

The big story may be in the fuel economy numbers. The EPA fuel economy numbers are 23-mpg city and 31-mpg highway for a combined 26 mpg. The city mileage is up 2 mpg, the highway is up 3 mpg and the combined is up 2 mpg. (All-wheel drive numbers are up 1 mpg/2 mpg/3 mpg respectively.) Not only are 2012 Honda CR-V owners paying the same for more content, they're paying less at the pump. That gnashing sound you're hearing is the teeth of 2011 Honda CR-V owners.

They might also be crying about the power. All 2012 CR-Vs are powered by a 2.4-liter i-VTEC 4-cylinder engine with 185 horsepower and 163 lb-ft. of torque paired with a standard 5-speed automatic transmission.

New for 2012 features include an Easy Fold-Down 60/40 Split Rear Seat, lower cargo floor and a range of standard technology features. New high-tech features standard on all models include a Bluetooth3 HandsFreeLink phone interface (previously an available feature) a full-color intelligent Multi-Information Display and a multi-angle rearview camera with guidelines.

As a first for Honda, every 2012 CR-V includes an SMS text messaging function, which can read received texts from compatible cell phones aloud over the audio system. Another firsts are the introduction of standard Pandora® Internet Radio interface4, compatible with the Apple® iPhone®, which works with the vehicle's audio controls and intelligent Multi-Information Display (i-MID) and the availability of a Rear Entertainment System (RES).

Just to throw salt on the wounds for 2011 Honda CR-V owners, the 2012 Honda CR-V in addition to having similar prices and better fuel economy, was also announced as a finalist for North American Truck of the Year further setting apart owners of the two models.