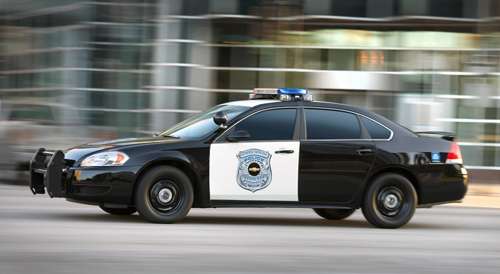 When it comes to police cruisers, the last thing most beat cops worry about is fuel efficiency but the bean counters have to be happy that the 2012 Chevrolet Impala police edition gets a combined 3 mpg better fuel economy than its predecessor.
Advertisement

The 2012 Chevrolet Impala police edition is powered by a new 3.6-liter, V-6 engine and a six-speed automatic transmission that gets 302 hp and an estimated fuel economy of 17 mpg city and 27 mpg highway. Now those are EPA numbers and real fuel economy numbers for the way cops use their cars will be much lower.

The first thing to consider is police officers spend a lot of time idling, whether it's sitting in a radar trap or filling out reports. Also, police cruisers carry a lot of equipment and that reduces fuel economy because each 100 lbs. of weight typically reduces fuel economy by 1 mpg. Plus, police officers tend to be fond of jack rabbit starts from traffic lights (along with 98 percent of the general population) and that's also going to suck up gas.

The one bright spot about the 2012 Chevrolet Impala police edition is the police market has become more of a level playing field with the demise of the Ford Crown Victoria Interceptor package (and the Crown Vic in general). Ford now offers a Ford Taurus police edition while Dodge offers the Charger Police Package, which should become a must-have vehicle with all the refinements to the 2011 Dodge Charger.

The 2012 model will be the first Chevrolet Impala Police to feature StabiliTrak, GM’s electronic stability control technology. Significant brake upgrades shortened the vehicle’s 60-0 mph stopping distance to 132 feet in GM tests. Impala’s steering and suspension systems are also new for 2012, reducing body roll and improving handling. Goodyear Eagle RS-A all-season tires, which have a W speed rating and enable speed of up to 140 mph if required, are standard on the 2012 Impala Police.

The handling component is going to be huge on the 2012 Impala Police because the previous generation model was sluggish off the line and pretty terrifying to drive through the inroad course at Pocono Speedway. It made one fear for the police officers who had to drive it on a daily basis.

For Some Former Daimler Managers Daimler Is Authority, While Tesla Is Like a Startup
How Daimler Unintentionally Subsidizes Tesla Giga Berlin
END_OF_DOCUMENT_TOKEN_TO_BE_REPLACED