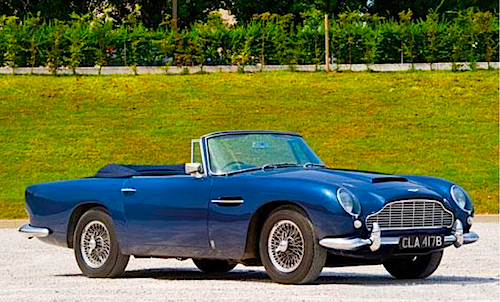 Sir Paul McCartney’s 1964 Aston Martin DB4 will be up for grab at the RM Auctions’ annual London sale on the 31s of this month. Can you guess the estimate?
Advertisement

James Bond and Beatles fans, eat your heart out. Sir Paul McCartney’s 1960 DB4, delivered new that year to the Beatles member will be hitting the auction hammer. RM’s upcoming October 31st sale promises some fantastic cars as usual, with a highlight on Great Britain’s best, including seven Aston Martin, an exceptionally rare 2001 Vanquish Prototype, the second produced by the factory, DB4s, DB5s and DB6s whose values have steadily increased over the past years.

Sir Paul McCartney’s 1960 DB4. This car will most likely command a premium. Not only was the car delivered new to McCartney in 1964 but it also comes with a heritage certificate from the British Motor Industry Heritage Trust confirming this fact. It also includes a Philips Auto-Mignon record player, fittingly for a Beatles member. How much? The estimates range from $575,000 to 605,000.

According to Max Girardo, Managing Director, RM Europe via Sports Car Market, “The broad selection of marques and values represented in this year’s London sale is what really sets it apart from other collector car auctions. RM always succeeds in bringing together some of the world’s finest automobiles, and this year we have a large number of lots that represent a broad cross section of the collector car market and which have been drawn from every corner of the globe. This international capability is what really sets us apart in the market place.”

British & Italian Automobiles. RM will showcase some of the best the British car industry had to offer us with Aston Martin, AC, Rolls-Royce and Bentley. But the British car heritage will be challenged with an equally spectacular 11 examples from Ferrari. A 250 GT LWB ‘Tour de France’ will be offered next to a Ferrari Classiche certified 1964 250GT Lusso Berlinetta, chassis 5101 GT. The estimates range from $975,000 to over 1 million. But collectors and motorsport fans will be happy to have the opportunity to bit on a 1998 Ferrari F300 Formula One Racing Car, chassis 183. This legendary Scuderia Ferrari team car was built for the 1998 season during which Michael Schumacher and Eddie Irvine were teammates and for whom this car intended to be used as a race day ‘spare’. The estimates range from $800,000 to 830,000.

Alfa Romeo. An auction sale is not an auction sale with pre-WWII Alfa Romeos sports racing cars. A 1930 6C 1750 GS ‘Testa Fissa’ that boasts an incredible period provenance with heritage. Indeed, it was raced to victory in the 1930 Tourist Trophy by racing icon and legend, Tazio Nuvolari. This is one of only 12 ‘Testa Fissa’ specification cars believed to have been built, it is also notable for having been the 1930 London Motor Show car. The estimates vary from $1,200,000 to over $1,430,000. It will be auctioned next to another eminently desirable pre-war Alfa Romeo, a 1934 6C 2300 with what has been reported as being in a stunning open competition coachwork and a meticulous restoration by one of the world’s leading Alfa Romeo experts. It should reach $440,000 to 560,000.

The rest of the auction will bring in a 2005 Maserati MC12, a 1955 Mercedes-Benz 300 SL Gullwing, one of only 29 cars built by the factory. On the motorcycle side of things, a very rare 1926 Brough Superior SS100 Alpine Grand Sports, as well as a 1952 Vincent Series C Black Shadow amongst a few more impressive items.

Global recession? What global recession? One thing the last few years’ worth of auction have shown us is provenance, heritage and race history will always prime over hyped “collector” cars. RM promises once again to raise the auction bar high, this time with none other than Sir Paul McCartney’s 1964 Aston Martin DB5.