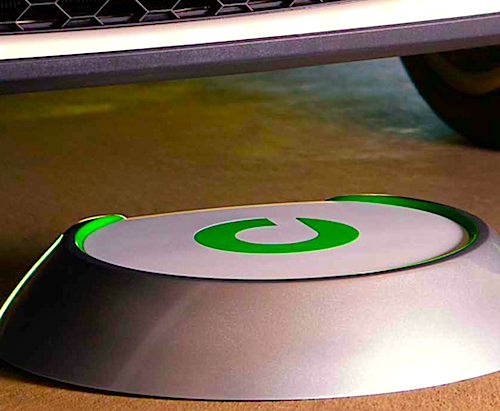 When it comes to introducing risk free electric cars into the mainstream, car rental is a no-brainer. Wireless charging systems could be just the right push to increase the adoption and convenience.
Advertisement

Wireless Charging Saves The Day. If you’ve been reading our latest electric car articles on TorqueNews.com lately, you’ll probably have noticed we are slightly enamored with the promise of ease and convenience when it comes to the wireless charging of electric cars. One of the other topics we covered is how car rental could be a boon to the new electric car market, as an efficient and cheap way to get your eco-curiosity satisfied.

Evatran, a company I interviewed at EVS26 in Los Angeles has already completed the first three installations of its Plugless Power wireless electric vehicle, EV charging technology. The program dubbed the Apollo Launch Program has partnered with Hertz, Duke Energy, and the Clemson University International Center for Automotive Research. While these installations are so far specifically for the electric Nissan LEAF, it does give electric vehicle rentals full wireless charging capability, easing the charging procedure.

The pilot program at the three locations will last for another 3 months. It will test the systems with an additional three installations this month and partnerships from California to Washington, D.C.

Technically Speaking. Wireless charging, a technology you might have encountered in your very own bathroom in the shape and form of a modern inductively charged toothbrush operates on the concept of charging without actual contact. Electromagnetic induction uses a two-coil design, one stationary, the other on the electric car or plug-in hybrid in order to form a magnetic funnel that excites electrons in the car’s coil, thus enabling a battery pack top recharge. This technology has matured enough to now allow as much as seven inches between both coils, making it a practical application for daily operations.

Another great aspect of the company was that the actual devices are easy on the eyes. How many times do you see a charge station or a wireless pad that looks as a square box? Evatran’s devices show an elegance rarely seen in the industry, something I am told Rebeca, Tom’s daughter has had a strong input on the company and continues to be a growing force within.

It is good to see startups challenging and strengthening their position with current technology for electric cars. In Evatran’s case, we are pleased to see their Apollo program using its Plugless Power system and partnering with car rental and energy companies.

MarvyMarv wrote on July 17, 2012 - 7:48pm Permalink
Inductive charging sucks if only for the reason that it wastes energy, and since the EV1, has been used as a handy way to keep you from plugging in anywhere and to perpetuate the lie that "there's no charging infrastructure". I can't tell you how many times I have wished I could plug my inductively charged RAV4EV into a simple receptacle. Inductive should be an option for those that find the convenience is worth the 10% energy penalty you are going to realize by using it.
Nicolas Zart wrote on July 18, 2012 - 12:40pm Permalink
Hi MarvyMarv, it's like any technology that we create at first. It's not great, then it gets refined. Just look at the quirky gasoline engine :) But kidding apart, inductive is now over 90% efficient and Halo has a neat system that even allows for non-alignement, within tolerence. Maybe I've watched Star Trek too much but new technologies have to start somewhere. In the meantime, conductive charging is the best to recharge an EV or PHEV, you're right.