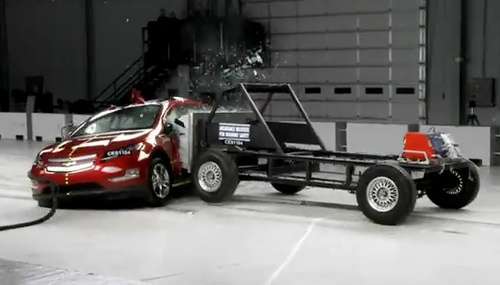 Last week GM announced plans to fix the battery pack fire risk, over the weekend NHTSA says they approve of the fix.
Advertisement

Last week GM unveiled plans for fixing the identified problem which caused the fire in a crash tested Chevy Volt last summer. In an interview over the weekend at the North American International Auto Show (NAIAS) in Detroit, National Highway Traffic Safety Administrator David Strickland made it clear they approve of the fix, that the NHTSA believes GM "put customers first," and that NHTSA plans to conclude its investigation soon without specifying the actual length of time.

Over the weekend Business Week interviewed David Strickland at NAIAS during which he said NHTSA is "comfortable" with GM's fix, but cautioning that the NHTSA investigation has not concluded. Transportation Secretary Ray LaHood is quoted saying GM had “worked very cooperatively” with regulators, and that “It’s in everybody’s best interest to make sure the Volt is safe to drive.”

GM is conducting what's known as a "Customer Satisfaction Program" which is essentially a recall, but without the full weight (or perhaps political baggage) of calling it an official recall conducted through NHTSA oversight. Chevy Volt owners are already receiving registered letters with instructions on what to do to have the fix installed in their cars, and the fix is already being implemented at the factory for newly built cars.