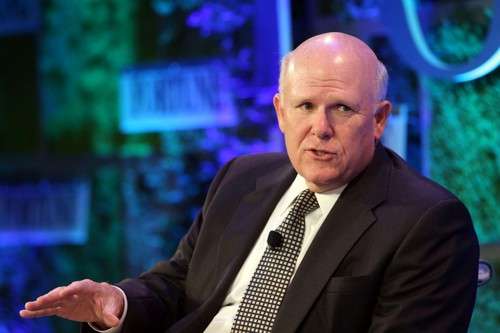 Speaking at Fortune's Brainstorm Green conference, G.M. chief executive Dan Akerson spoke about the company's sustainability efforts and greener vehicles. He said the next-generation Chevy Volt, due in 2015 or 2016, would cost less to build and finally be profitable.
Advertisement

On Tuesday, GM's CEO Dan Akerson said the next generation Chevy Volt will be significantly less expensive than the current model. The remarks came during a wide ranging interview at Fortune's Brainstorm Green conference in Laguna Niguel, Calif.

Akerson said that while GM has sold about 26,000 Volt's so far, by 2017 the company will have sold a half million electrified vehicles. This number includes the mild hybrids, regular hybrids, plug-in hybrids, and plug-in electric vehicles. His comments covered the full range of sustainability efforts being undertaken by General Motors, from highly fuel efficient vehicles to operating dozens of no-landfill facilities and having more rooftop solar installations than any other automakers. On Wednesday, GM signed the Climate Declaration.

The next generation Volt, which is not due until 2015 or 2016, will feature a number of changes.

The battery pack will recharge from the gasoline engine while driving, something that is common among hybrids but the Volt does not do. Akerson also said this feature will be in the Cadillac ELR. The ELR and Volt share a lot of technology.

Significant cost reductions, in the range of $7-10,000, will be made without "decontenting" the Volt. In other words, the Chevy Volt will deliver the same performance and creature comforts as the current model.

Akerson did not explain how the cost reductions would be achieved, however he and other GM executives have made statements giving us a clue about how it might be done. Over the last year Akerson and others have said that, in a few years, GM expects to be able to offer a 200 mile range electric car. That will happen due to improved battery technology with higher energy density. Higher energy density means car designers can either offer a longer driving range with a battery pack the same size, or offer the same driving range in a smaller battery pack. The latter choice will also let the automaker reduce the price.

Akerson also said he expects the Volt to finally be profitable for GM.

Reducing the Volt's price would help G.M. compete against other plug-in electric vehicles. Nissan, for example, significantly reduced the entry-level price of the 2013 LEAF. “We know we have to reduce costs,” said Akerson. “We’ve got to look at smart ways at getting it better positioned from a price perspective, and that means we’ve got to take cost out of it.”